AIADMK Chief J Jayalalithaa convicted: What next for Tamil Nadu? Will it be DMK or BJP?

Jayalalithaa might see a very different political scene in Tamil Nadu when she returns. 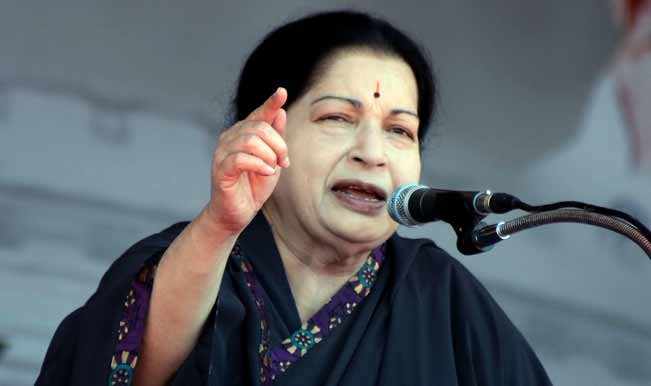 A special court on Saturday held the AIADMK chief and Tamil Nadu Chief Minister Jayaram Jayalalithaa guilty of amassing Rs 66.65 crore wealth disproportionate to known sources of her income during her first term in office. Her conviction has led to violent protests in Tamil Nadu. Surprisingly though, the DMK has come out stating that they neither want governor’s rule in Tamil Nadu nor a dissolution of government, basically allowing the current reign of AIADMK to continue without J Jayalalithaa as Chief Minister. Also Read - Bihar Assembly Elections 2020: NDA is One, Will Contest Polls Together, Says Ravi Shankar Prasad

There are many possible reasons why the DMK is not keen on dissolving the government. To begin with, DMK itself is facing a credibility crisis in Tamil Nadu. Its members are facing charges over 2G spectrum scam, with A Raja and the DMK chief M. Karunanidhi’s daughter Kanimozhi being the chief accused. It did not win a single seat in the Lok Sabha elections in 2014 and lost the assembly election with a thumping margin of 172 seats. AIADMK+ alliance won 203 out of the 234 seats, with the main party itself winning 150 seats, while the DMK+ alliance winning the other 31 seats. Also Read - 'Nothing More Than Desperate Case of Political Compulsion For Badals', Punjab CM on SAD Snapping Ties With BJP

Both the regional parties of Tamil Nadu are now scam tainted. The DMK caused the exchequer a loss of Rs 1.76 lakh crore while it was in the Congress-led UPA alliance by illegally undercharging mobile telephone companies for frequency allocation licenses, which they would then use to create 2G spectrum subscriptions for cell phones. The Bhartiya Janata Party, on the other hand, has just made in-roads in the state by winning its first seats in the state in the Lok Sabha elections.

If AIADMK continue to be in power, this time without J Jayalalithaa, it buys time for DMK to rebuild itself. The DMK did not win a single seat in the Lok Sabha election, something that must be its nadir. Also, the lack of a strong leader in the AIADMK ranks might have a bearing on its performance. Till now, Jayalalithaa had all the limelight. With her gone there is a possibility of infighting within the party and fierce competition. This might have an effect on the results of the next elections as Jayalalithaa has been barred from contesting elections for ten years.

This is an interesting move by DMK. BJP is yet to speak up. AIADMK might be in a fix. Regardless of all that, Jayalalithaa might see a very different political scene in Tamil Nadu when she returns to competitive politics in Tamil Nadu.