There's no denying that after her 5-year break from the biz, “Jazbaa”—an adaptation of the Korean “Seven Days”—is an Aishwarya Rai Bachchan fest through and through.

Much is often made of using the term “comeback” to describe an actress’ appearance in a film after a few years away—the media relishes it, while industry insiders scoff as though any notion of them having “faded” from the spotlight, however temporarily, is unthinkable and offensive. Whether you’re on board with the word or not, I’m just going to go ahead and use it here because there’s no denying that after her five-year break from the biz, “Jazbaa”—an adaptation of the Korean “Seven Days”—is an Aishwarya Rai Bachchan fest through and through. Also Read - From Priyanka Chopra Jonas to Amitabh Bachchan And Kareena Kapoor, How Bollywood Celebs Rang in New Year 2021

It’s obvious from the very opening frame: the first in a montage of shots following her while she completes her morning exercise routine. Jogging and warrior-posing along the Mumbai sea face, it’s as if she’s literally gearing up for her return to acting—in this case, it is as a single mom and superwoman lawyer, Anuradha Verma. Also Read - Shah Rukh Khan, Ranbir Kapoor, Fardeen Khan – Get Ready For These 9 Bollywood Comebacks In 2021

Anuradha is pretty much the proverbial woman who has and does it all: she’s a former track runner who wins relay races at her kid’s school sports day. She wears carefully tailored pantsuits to her sleek, high-rise office and she can hold a plank for more than three seconds. But Anuradha’s world comes crumbling down when her daughter is suddenly abducted, and she is forced to defend the accused in a rape and murder case as ransom.

Anuradha was targeted because of her famous 100 percent track record of bailing out the guiltiest of culprits, which we see right off the bat when she wins a case defending a criminal simply because she talks louder than her male opponent (thus checking off the “empowered female character” box on the rubric of requirements for any respectable heroine’s said come back). Her entirely unconvincing success is reason enough not to take the film seriously within the first five minutes.

Fortunately, despite the premature abandonment of credibility, “Jazbaa” does elicit a surprising degree of engagement. I wouldn’t credit too much of this to director Sanjay Gupta, though, who seems preoccupied with highlighting his lead actress’ comeback, devoting a few too many superfluous scenes to Rai shrieking, running in slow motion, and glaring through red-rimmed eyes. It’s to Rai’s credit that between the histrionics, she shows a softer sincerity that speak volumes more than the screeches—her silent but obvious guilt at taking on a case she knows is wrought with injustice, her controlled intensity in the courtroom (opening scene aside), and her solid grip of the role of a mother who becomes hardened against reason against the threat of losing her child, fighting for one cause while turning her back on another. In fact, Rai’s theatrics are minimal compared to those of Shabana Azmi, who is the surprisingly greater disappointment, hamming it up for all she’s worth as the rape victim’s mother. 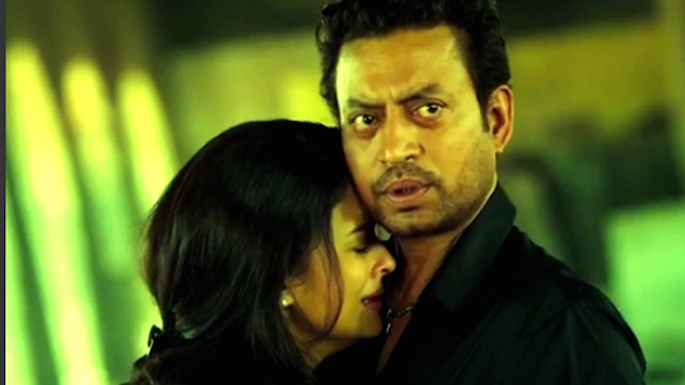 Rai’s unexpected but refreshing moments of restraint are accompanied by an even more welcome co-star in Irrfan Khan as Yohaan, a suspended police officer and Anuradha’s childhood friend. No matter how dubious the circumstances (indeed, even Yohaan is made to holler, smash a few windows, and spout more than a couple of cringeworthy lines), Khan gives them a grounding sense of validity, whether it’s thanks to his subtle, almost deadpan delivery of humor or simply his quietly confident presence.

“Jazbaa” includes solid performances and some genuinely chilling twists, but it remains firmly in neutral territory. Also, a few monologues and end-credit statistics about the Indian judicial system’s inadequate response to rape cases seems forced; the larger issues are clumsily squeezed into a screenplay that has loftier goals than what Kamlesh Pandey’s cheesy dialogues and Gupta’s somewhat distracted direction are equipped to handle.

At times yielding to more melodrama than necessary, “Jazbaa” is a watchable come back for Rai—but we look forward to bigger hits.