The screening is being conducted for new entrants being brought to jail. All old inmates, meanwhile, have been tested and have not displayed any coronavirus symptoms thus far.

Delhi: In a bid to contain the coronavirus pandemic, the capital’s Tihar Jail has set up an isolation ward in the jail premises, where new entrants are being screened before being allotted a cell within the premises.Also Read - Infosys Vacates Bengaluru Building After Employee Suspected of Contracting Coronavirus

Notably, Delhi has thus far reported six confirmed cases of the virus, of which one, a 68-year-old woman, died at the city’s Ram Manohar Lohia (RML) hospital last night, becoming the country’s second case of death due to coronavirus. Also Read - All Major Badminton Events Suspended by BWF Till April 12 Amid Coronavirus Fear

Speaking to news agency ANI, a Tihar Jail official said, “An isolation ward has been set up at the jail. All inmates have been checked and not displayed symptoms, new inmates are being screened and will be kept in different wards for three days.” Also Read - Coronavirus: Hindu Mahasabha's Gaumutra Party Today in Delhi; Poster Goes Viral

“Around 17,500 inmates are lodged in the jail currently,” the official added. 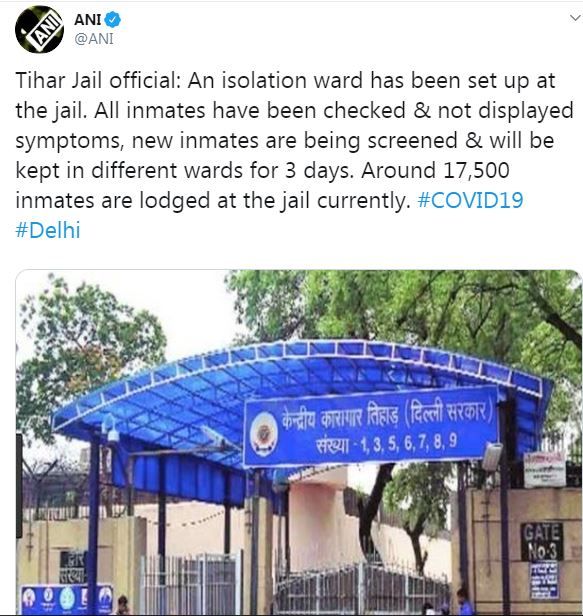 The inmates are kept in a quarantine facility set up in a special cell, before being transferred to their respective wards. Foreign inmates, too, were being shifted to a special ward after expressing concern about the virus.

The jail hospital, too, has been directed to keep adequate stock of saline as well as paracetamol. Inmates, meanwhile, have been advised to wash their hands and use hand sanitisers after stepping out of and returning to their cells.

Notably, this development comes amid preparations being made in the jail to execute the four death row convicts in the 2012 Nirbhaya gang-rape case. The four, who have exhausted all their legal options, are scheduled to be hanged at 5:30 AM on March 20.