‘Not Suffering From Any Disease’, Home Minister Amit Shah Refutes Rumours About His Ill-Health; 4 Held

Taking to Twitter, Shah issued a statement and said that 'various social media users have speculated about my health and some have even prayed for my demise

New Delhi: Union Home Minister Amit Shah on Saturday refuted rumours about his ill-health and said that he is not suffering from any disease. Taking to Twitter, Shah issued a statement and said that ‘various social media users have speculated about my health and some have even prayed for my demise. Also Read - Coronavirus: Total Tally Reaches 1.58 Lakh as India Prepares For Staggered Opening From Next Week

“I am completely healthy and not suffering from any disease,” the Home Minister tweeted in Hindi. Also Read - 'COVID Doesn't Stop Periods', Akshay Kumar Urges All to Donate Sanitary Napkins to Underprivileged Women

Shah asserted that that he did not pay heed to the rumours initially as he was busy busy performing his duties as the country is fighting a public health crisis like the coronavirus. Also Read - Coronavirus LIVE: Cabinet Secretary to Hold Video-Conference With States As Lockdown 4.0 Nears End

“I thought it was better that these people are left with their imaginative world, hence I did not give any clarification”, the Home Miniser said, adding that he was clarifying today as lakhs of BJP workers and his well wishers have expressed concern over the last two days.

Furthermore, he expressed gratitude towards them for inquiring about his health and requested people to stop indulging in such rumours. 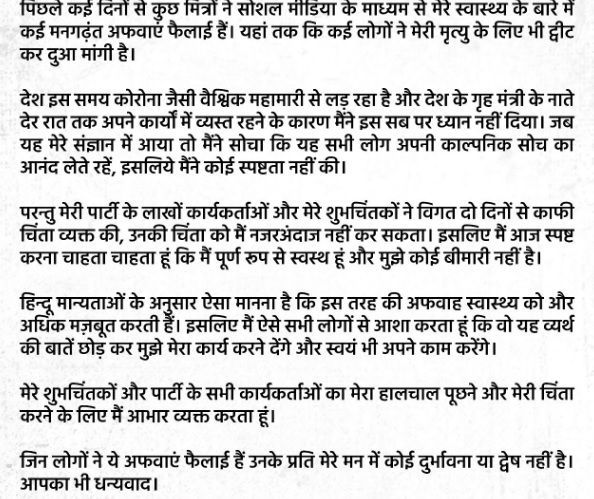 Meanwhile, reports have claimed that Ahmedabad police crime branch has arrested four  people for allegeldy spread rumours about the Home Minister’s health. The accused have been identified as Firoz Khan, Sarfaraz, Sajjad Ali, and Shiraz Hussain.