Are Pakistan low-yield nuclear weapons a threat to India?

Pakistan has more nuclear warheads than India but we don't need to be scared.

New Delhi/Islamabad, Oct 21: Pakistan has developed low-yield nuclear weapons to deal with India’s cold start doctrine that Pakistan claims was developed by Indian military for use in a possible war with the neighbouring nation. It is the first time that a senior Pakistani official has explained country’s decision to make tactical nuclear weapons, renaming it as the country’s proactive strategy. The Foreign Secretary Aizaz Chaudhry statement is also seen as a warning to India as nuclear weapons are meant primarily to scare and deter. Should India be worried about the nuke threats of Pakistan? How well are we prepared if Pakistan carries out the threat?Also Read - Quad Countries Have Common Vision For Future, Working Together To Take On Key Challenges: US President Joe Biden

What is low-yield nuclear weapons? Also Read - Modi US Visit: PM to Meet President Biden Today | Here's What to Expect From Their First Tete-a-Tete

According to The Diplomat website, observers often distinguish between long-range, high-yield “strategic” nuclear weapons and short-range, low-yield “tactical” nuclear weapons, no formal distinction exists between the two types of weapons. In the eyes of the international community, even the use of a low-yield nuclear weapon in wartime would mark a significant escalation and increase the risk of all-out nuclear war. Also Read - Modi-Harris Meet: PM Thanks US for Extending Help 'Like a Family' During Second Covid Wave | Key Points

However, Pakistan has more nuclear warheads than India but we don’t need to be scared. India’s nuclear power has surged over the years. India has strengthened itself with nuclear-armed strike aircraft, land-based inter-continental ballistic missiles (ICBMs) and sea-based submarine-launched ballistic missiles (SLBMs). India has around 12 ICBM missiles including the most recent, Agni-IV and Agni-V. Agni V has a range of 5,000 km, which means it can reach all of China. Agni-VI is also under development, with an envisioned range of 6000–8000 km and features such as Multiple independently targetable reentry vehicles (MIRVs) or Maneuverable reentry vehicles (MARVs). (ALSO READ: Pakistan’s nuclear weapons ‘not against anyone’: Nawaz Sahrif) 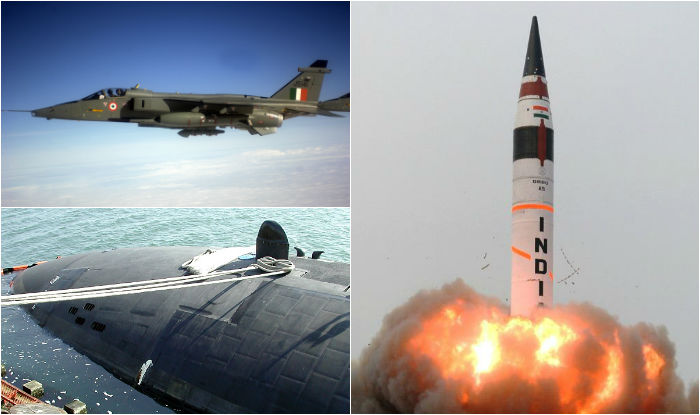 Pakistan army is loaded with medium range ballistic missiles with ranges up to 2500 km and  Babur cruise missiles with ranges up to 700 km. It also possesses tactical nuclear weapons for use on the battlefield with ranges up to 60 km such as the Nasr missile. The Pakistan Air Force (PAF) has two dedicated units (No. 16 Black Panthers and No. 26 Black Spiders) operating 18 aircraft in each squadron of the JF-17 Thunder, which can carry and deploy nuclear weapons. The PAF also possesses the Ra’ad air-launched cruise missile which has a range of 350 km and can carry a nuclear warhead with a yield of between 10kt to 35kt.

When it comes to sea, Pakistan is lacking advanced warships as compared to India. Pakistan is developing a sea-based va0riant of the Hatf VII Babur, which is a nuclear-capable ground-launched cruise missile. In response to India’s Arihant, Pakistan is working on building submarine that can carry nuclear weapons.

India’s Nuclear Doctrinet says India will use atomic weapons “in retaliation against a nuclear attack on Indian territory or on Indian forces anywhere.” “The counter attack will be massive and designed to inflict unacceptable damage,” it added. Though Pakistan refused to adopt a “no-first-use” doctrine, indicating that it would strike India with nuclear weapons even if India did not use such weapons first. Pakistan is living in fool’s paradise if it underestimate India’s nuclear strength. Pakistan may begin the nuclear war with India but India is capable to wipe out the neighbor country from the map of the world.