The much-hyped interview of Modi, has also led to a cold war between two former colleagues - Arnab Goswami and Rajdeep Sardesai.

Arnab wrote, “For me, working far away from the machinations and intrigue of Lutyens journalism, the collective outrage of Lutyens journalists at the fact that I got the interview is amusing. One of them, a has-been anchor who desperately lobbies for an opportunity to be invited on my Newshour debates, even put out a tweet asking why the prime minister chose to give an interview to me and not hold a press conference. Embarrassed by the angry reactions, she deleted the tweet later. I thought her question was intellectually disjointed.” Also Read - #BoycottZomato Trends After Swara Bhasker Asks Company to Pull Out Ad From Republic TV 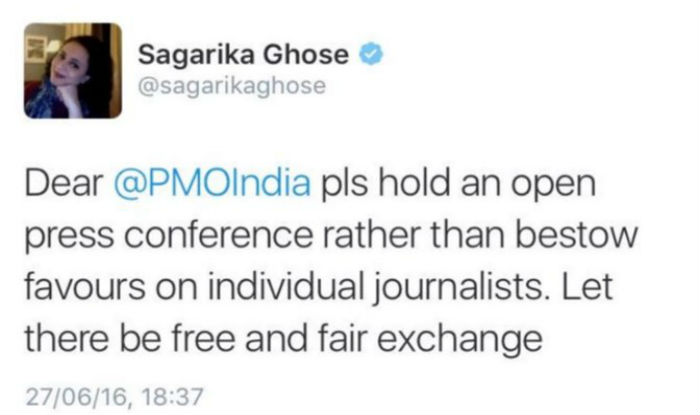 After Arnab’s jib at Ghose, many Twitter users tagged her husband and renowned journalist, Rajdeep Sardesai, for a comment. Instead of hitting back at Arnab, Rajdeep asked his followers to better ignore him. “Not at all. They and their glorified hero have revealed their mindset. Let them continue,” replied Rajdeep to a twitterati.

Not at all. They and their glorified hero have revealed their mindset. Let them continue. https://t.co/F32EnKFOkL