This open letter written by Rohit Kumar, a resident of Bihar and a one-time staunch supporter of Arvind Kejriwal describes the tragedy of the 'Aam Aadmi' who pinned his hope in the political revolution known as 'Aam Aadmi Party'

After triumphing back to power in Delhi, Arvind Kejriwal gained strong electoral ground in Indian politics. But shortly after the grand victory, the anti-corruption crusader lost something which was way too precious for his Aam Aadmi Party (AAP). The utopian political outfit cease to be comprised of die-hard volunteers. A large number of members resigned from the party after Kejriwal allegedly adopted an autocratic manner of functioning. The AAP convenor, who was portrayed as grassroot leader, soon adopted a high-command culture and surrounded himself with a loyal coterie. Also Read - RT-PCR Testing Cost to be Reduced in Delhi, CM Kejriwal Issues Fresh Directives

The subsequent expulsion of founding members Yogendra Yadav, Prashant Bhushan, Prof Anand Kumar and a number of renowned dissidents led to a spree of nationwide resignation of AAP volunteers and members. The following open letter written by Rohit Kumar, a resident of Bihar and a one-time staunch supporter of Arvind Kejriwal describes the tragedy of the ‘Aam Aadmi’ who pinned his hope in the political revolution known as ‘Aam Aadmi Party which ultimately proved everyone wrong who began romanticizing with this political alternative. (ALSO READ: Arvind Kejriwal attacks Narendra Modi in fiercest manner: Did AAP chief succeed in rejuvenating ‘Aaptards’?) Also Read - ‘Don't Bite Hands That Feed You’: AAP Launches Scathing Attack on Centre, Supports Farmers 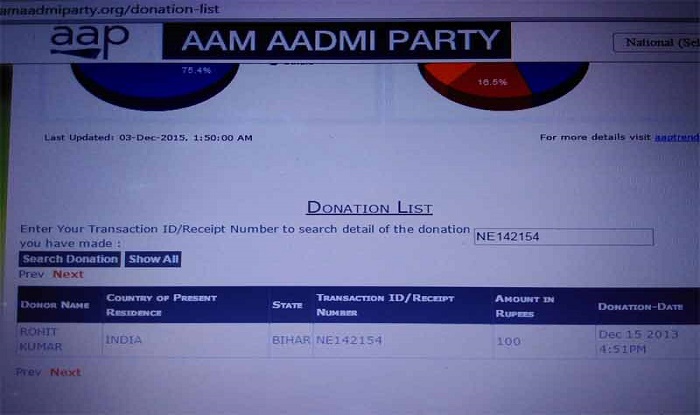 Also Read - Tear Gas, Water Cannons: 10 Pictures & Videos to Show How Farmers Who Feed Us Are Being Treated | Watch

Here is the heart-touching letter of the ex-supporter of AAP:

I have decided to write this open letter to you after an extensive battle with my own Conscience. Truly speaking, I had to struggle excessively to muster up my courage to decide to declare my disengagement with you and your Party, both of which are hardly distinguishable, through an open letter. But, since I had announced my affiliation with your Party publically with a proud feeling by sharing the Party’s Membership Certificate and the donation certificate of Rs.100/-on my Facebook timeline, I must declare my break up with you in the similar fashion. Before, putting my heart on the paper or the detailed line of reasoning behind my decision to untwine knot with you, I feel it necessary to introduce myself to you, first. This young soul who is sick to the core by yours and your Party’s multifarious aberrations from the real objectives of the corruption-free movement, has been one of your ardent supporters erstwhile, currently pursuing his 4th year of B.A.LL.B from School of Law, KIIT University, Bhubaneswar.

The ‘Aam Admi Party’ was formally launched on 26th of November 2012 and I decided to join the Party on 25th of January 2013 i.e. within two months of its formal launching. I had also donated Rs.100/- to the Party for its cause dated 15th of December 2013 at 4:51 PM vide transaction No NE142154. I am producing herewith my membership and donation certificates in order to prove the veracity of what I state here.

Though, my entire family has been dedicated BJP supporter, more particularly, my father and uncle who have devoted their entire life, serving to the cause of BJP and its ideology, I dared to depart from their conventional line of thought to support you. This, led to the occurrence of heated arguments among me and my family members intermittently. They tried their every possible way to convince me using their protracted political experience that your movement is just a political gimmick to acquire power but my political infatuation for you and your party simply failed their every such attempt.

Not only this, I have always been subjected to ridiculous treatments by many of my friends who are staunch BJP proponents in the Law Boys’ Hostel where I presently stay. The day, your Party secured 67 out of 70 seats in Delhi Election, I had celebrated those mesmerizing moments by slicing a cake in your name for which I had to face a strong abusive response from many Modi monomaniacal  in my hostel. But, none of these incidents possessed the potential to defeat my zeal to support a cause dedicated to the eradication of corruption.’

‘You may or may not believe, but I had made a resolve to myself that if ‘Aam Aadmi Party’ won election in Delhi, I would undertake a pilgrimage to “Maan Vaishno Devi” and seek blessings from Goddess Durga for such success and its continued service to Indian Public. I successfully undertook that pilgrimage along with one of my close friend Kundan Kumar Ojha who was identically infatuated to the cause after ‘Aam Admi Part’ made a clean sweep in Delhi election.

After undertaking our pilgrimage to Maan Vaishno Devi’s Sanctum Sanctorum we decided to come to Delhi directly instead of our respective abodes so that we may meet you and offer you the “Prasad” which we had brought and kept for you with an extreme devotedness. We went to your Party offices in Kaushambi and Patel Nagar both and offered ‘Prasad’ to everyone present there.

Next day, at 8 am we got lined up near your house in Kaushambi where you used to organize ‘Janta Darbar’ but at around 11 am, it was announced that you had gone to meet the family of the martyred CRPF officer Narrottam Das. We also tried next day but couldn’t succeed. Ultimately, we handed over a bag of ‘Prasad’ to your Car driver with a slip inside it pouring our affection in words. This all I have stated to spectacle my dedication to the cause you had espoused.

But today I have no more faith in you. I atone my every action of dedication. I also regret that I should have decided this earlier to break tie with you when you and your syndicate of sycophants humiliated and thrown out the cerebrum of the movement Shri Shanti Bhushan, Prashant Bhushan, Yogendra Yadav and Anand Kumar by creating a sordid episode in the National Council Meeting dated 28th of March 2015, only because they were not ready to be your sycophants. Your short political journey from a transparency lover to a sycophancy lover has taught me long-lasting political lessons. I felt outrightly deceived and my head hanged in shame when I saw you hugging the epitome of corruption Mr. Lalu Prasad Yadav.

Your peculiar journey from Anna’s Janlokpal to your own Man’s Lokpal is never pardonable Mr. Kejriwal. I feel double-crossed when Delhi CM Secretariat stonewalls my R.T.I application on similar unjustified grounds which the P.M.O does. I felt utterly betrayed and I am sure many more like me feel the same way. I also feel that ‘Betrayal’ is not an appropriate word to define your hoity-toity character and out of the blue deeds. It is much more than that. It is a cardinal sin committed on your part. You have tried to butcher the hope of this nation. You have tried to dismantle the dream of a corruption-free society.

You have attempted to ruin the credibility of the civil society where you initially belonged to. You have sold the people down the water who had counted on you.  However, you can just try to do so but can’t succeed because the glittering history of this Nation bears testimony that no cunning like you possesses the potential to murder the hope of this Nation or to dismantle the dream of a good cause. In an attempt to murder the Nation’s hope, you have inadvertently proceeded to dig your own political tomb where you and your unforgivable political history shall be buried as another renegade.’