Arvind Kejriwal completes 100 days: How many marks does the AAP-led Delhi government deserve?

The AAP has made a steady start with delivering on many promises but the job is not done yet. 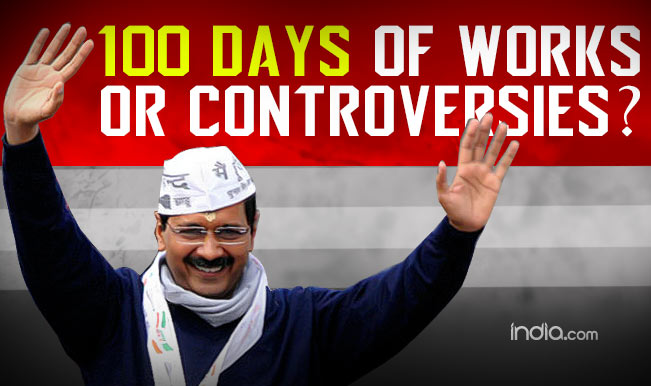 Unlike his first stint, Aam Aadmi Party (AAP) Chief Arvind Kejriwal seems to have gone very long this time. Today. AAP-government completes 100 days in Delhi. The 100 days of Delhi-government was a roller coaster ride with AAP delivering many of its promises and irked controversies too. Arvind Kejriwal took charge of Delhi as Chief Minister on February 14 after getting land-sliding victory in Delhi Assembly Elections. Also Read - Delhi Vaccination Drive to be Held at 81 Centres, Four Days a Week: CM Arvind Kejriwal

Arvind Kejriwal after taking oath assured a transparent and corruption-free government. Whether you like Kejriwal or not but you will have to accept that the corrupt have been reined to an extend during a short span of 100 days. We take a look at the achievements and failures of AAP-government since it came to power. (Gajendra Singh’s suicide: Is Aam Aadmi Party solely responsible for farmers’ suicide?) Also Read - AAP Starts Installing Wi-Fi Hotspots at Tikri border for protesting farmers, Second Spot After Singhu

1- Power subsidy and free water: The AAP-government in Delhi has delivered on some of its big promises. It has announced 50 per cent subsidy on monthly power consumption of up to 400 units. Although it hasn’t reduce the power tariff but sought audit of discoms from CAG after which it power rates will be reduced.

The AAP-government announced 20,000 litres of free water per month to all households. It also brought down the water development and sewer development charges in unauthorized colonies. The subsidy on power rates and free water provided major relief to around 10.5 lakh consumers.

3- Regulation of Unauthorized colonies: Delhi CM Arvind Kejriwal banned demolition announced time-bound regularisation of all unauthorised colonies in Delhi and assured those living in the slum that they would shortly get permanent housing facility.

4- Solving auto-rickshaw problem: The AAP-government announced a slew of sops like annual fare revision, over 400 new halt-and-go stands and relaxation in rules, including permission to refuse customers while returning home. 19,000 learner’s licences were issued to e-rickshaw drivers in special camps.

5- Other achievements: The process of installing WiFi has begun. CCTV cameras are being installed across the state. The AAP-government has asked PWD to construct 30 model schools. To provide women security, home guards are being trained and will be deployed in buses. It cleared 30,000 the old-age pension requests. For farmers who lost 70 per cent of their crops, Delhi-government announced a compensation of Rs 20,000 per acre.

However, this time AAP-government is showing no hurry in presenting Jan Lokpal Bill. It will send it to Centre for seeking its point of view on it and then table in assembly.

Although the AAP-government tried to focus on governance, it drew more attention for the controversies it made.

Aam Aadmi Party split following the tussle between Arvind Kejriwal and Yogendra Yadav along with Prashant Bhushan. Both the senior leaders accused Arvind Kejriwal of adopting dictatorship in the internal matters of party. While the Kejriwal-faction alleged that two leaders were involved in conspiracy against Kejriwal and anti-party activity. The war of words ended when the AAP expelled Yadav and Bhushan from party. Kejriwal faced lots of criticism for removing the two leaders and was also called ‘selfish’ for the same.

AAP-government came under scrutiny when the Delhi High Court served its Law Minister Jitender Singh Tomar regarding allegation of holding a fake degree. The petitioner has alleged that Tomar’s Bachelor of Science (BSc) degree from Avadh University was fake. Later, Tomar said that he holds a valid law degree from the Chaudhary Charan Singh University. The issue of fake degree certificate is still in court. The row brought ire against Kejriwal and his government.

A farmer from Rajasthan Gajendra Singh hanged himself during Aam Aamdi Party’s (AAP) rally at Jantar Mantar, Delhi and the blame game began. The Delhi police registered a First Information Report (FIR), accusing AAP volunteers for instigating Gajendra Singh. The suicide of Gajendra Singh led to fierce criticism against the AAP with opposition demonstrating protest outside the residence of Kejriwal. Rivals alleged that Kejriwal and other senior leaders ignored Gajendra Singh and kept continuing their provocative speeches that led to the tragic incident.

The AAP-government came under attack by all political parties and netizens on social media when it issued a controversial circular calling on all government officials to report matters of criminal defamation against him (Arvind Kejriwal) and other officials. The circular was referred to Section 499 and Section 500 of the Indian Penal Code, which deals with defamation. The Delhi government had asked government officials to report such matters to the Principal Secretary (Home) but the Supreme Court gave a stay order on the controversial circular issued by Kejriwal. The apex court also accused Kejriwal of double standards by seeking stay of criminal defamation proceedings against him but issuing a circular permitting action against media groups for defamatory reporting. Since the formation of AAP, Kejriwal has love-and-hate relationship with media.

Arvind Kejriwal indulged into a fight with Lt Governor (LG) Najeeb Jung over the appointment of Shakuntala Gamlin as Chief Secretary. Moreover, the LG cancelled few other appointments of bureaucrats made by AAP-government. Both Kejriwal and Jung took their fight to the President Pranab Mukherjee and accused each other of violating the Constitution. Amidst the high drama, Ministry of Home Affairs issued notification saying that the LG has powers in postings and transfers of officers belonging to Central services. Kejriwal took strong objection over the notification and accused Narendra Modi-government at Centre of “back-stabbing” the people of Delhi. The issue has not been solved yet.

As far as governance is concerned, AAP-government led by Arvind Kejriwal seems focused on delivering on its promises. The AAP has made a steady start with delivering on many promises but the job is not done yet. Kejriwal must avoid controversies and concentrate on administration. AAP-government deserves 6 out of 10 marks for its work-oriented 100 days of governance.