As Hospitals Gasp For O2, Indian Air Force to Fly in 23 Oxygen Plants From Germany

IAF has deployed its transport aircraft C-17, C-130J, IL-76, An-32 and Avro while keeping its Chinook and Mi-17 helicopters on standby.

New Delhi: As various coronavirus-hit states continue to reel under acute shortage of medical oxygen due to a massive surge in COVID-19 cases, the Defence Ministry has decided to airlift 23 mobile oxygen generating plants from Germany. “Each plant will have a capacity to produce 40 litres of oxygen per minute and 2,400 litres every hour. They will be deployed in the Armed Forces Medical Services (AFMS) hospitals catering to the COVID patients”, Principal Spokesperson in the Defence Ministry A Bharat Bhushan Babu said.Also Read - Ladakh: 7 Army Jawans Killed, Several Injured After Vehicle Falls into Shyok River in Turtuk Sector

Furthermore, he asserted that the oxygen generating plants are expected to be airlifted within a week. Speaking to reporters, another official said that the Indian Air Force has been told to keep its transport aircraft ready to bring the plants from Germany once required paper works are completed. He said more oxygen generation plants may be procured from abroad. Also Read - Germany Recognises Bharat Biotech’s Covaxin For Travel Purposes. Here’s What It Means For Indians 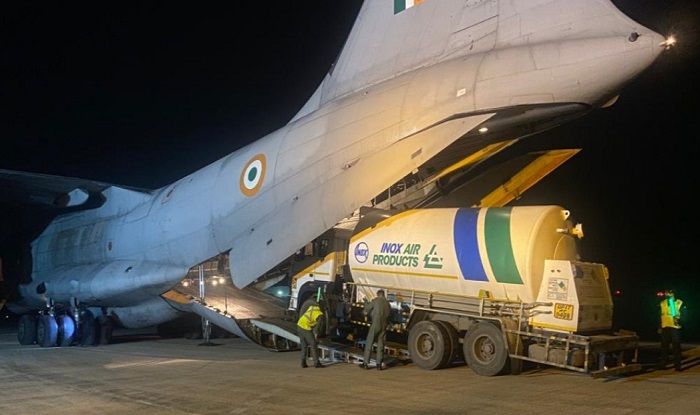 Chinook And Mi-17 Helicopters on Standby

IAF has deployed its transport aircraft C-17, C-130J, IL-76, An-32 and Avro while keeping its Chinook and Mi-17 helicopters on standby.

In view of the pressing Requirement of medical oxygen, Telangana government has hired two cargo aircraft of the Indian Air Force to ferry eight empty tankers to Odisha to bring liquid oxygen, state Health Minister Etela Rajender said yesterday. The oxygen are to be brought from the steel plants in Rourkela and Angul, Odisha.

The two C-17 aircraft had left for Odisha from Begumpet Airport and the empty tankers would be filled with liquid oxygen and return by road thus saving three days of journey time, he said.