Despite securing more amount of votes than BJP, Congress ended up losing the state in a miserable manner.

Guwahati, May 19: Results of Assembly Elections 2016 have been declared. Bharatiya Janata Party (BJP) received an unprecedented majority in Assam. It paves the way for the party to form its government in the north-eastern state for the first time. The incumbent regime of Chief Minister Tarun Gogoi has been uprooted by the saffron ethnic coalition of BJP, Asom Gana Parishad (AGP) and Bodoland People’s Front (BPF).Also Read - Fire Breaks Outs at Paediatric Ward of a Hospital in Assam, All 12 Children Rescued Without Injuries

Within the BJP alliance, the saffron party is leading on 89 seats, whereas the AGP and BPF have maintained their grip on 16 and 12 seats respectively. The voteshare of BJP was measured to be 29.6 per cent, whereas, AGP received votes of 8.4 per cent of the electorates. BPF, on the other hand, secured a significant voteshare of 3.8 per cent, considering the fact that it was contesting on only 12 of the 126 constituencies. Also Read - Assam Govt Releases Guidelines For Chhath Puja And Raas Festival | Complete SOPs Here 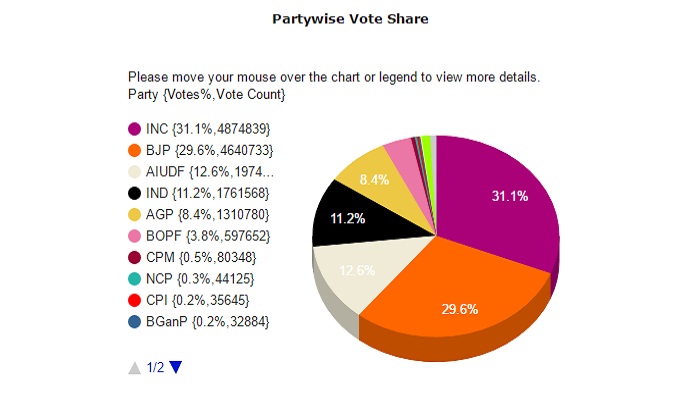 As per the information released by Election Commission of India, Congress polled in more amount of votes than the BJP. The party secured the trust of 31.1 per cent of the electorates. Meanwhile, the pro-Muslim outfit AIUDF also succeeded in winning the votes of 8.4 per cent of the voters. However, the decision of Muslim votebank between Congress and AIUDF created a huge advantage for the BJP.

Here are the 5 reasons why BJP lost out in such a miserable manner in this electoral battle:

1. Consolidation of anti-Gogoi votes: The alliance with AGP and BPF turned out to be masterstroke for the BJP. The saffron party succeeded in consolidating the anti-Congress votes. The votes of Bengali speaking Hindus, ethnic Assamese tribes and Assamese speaking workers ended up falling towards the BJP-led coalition.

2. Raking up the issue of fading Assamese identity: The hallmark of BJP-AGP-BPF campaign was their concentrated effort on raising the passion of Jai Aai Ahom. The trio successfully lashed out at Tarun Gogoi, accusing him of adopting a soft stance towards Bangladeshi infiltrators who are altering the demographic and ethnic identity in the state.

3. Anti-incumbency: Facing an anti-incumbency of 15 years, the regime of Tarun Gogoi grew highly unpopular in Assam, with a large section of young voters vying for change. The 79-year-old veteran Congressman was earlier too requested to leave the reigns of the party by rebel leaders after the debacle in 2014 Lok Sabha elections.

4. Himanta Biswa Sarma: Once known as the blue-eyed boy of Chief Minister Tarun Gogoi, Himanta Biswa Sarma switched over to Congress in 2015, after he led an internal rebellion within the Congress against Gogoi. Sarma had sought a meeting with Rahul Gandhi after 2014 poll debacle to express the plight of Congress workers in the state. However, the Congress vice president only allocated 3 minutes to meet with him, and as per the claims made by Sarma, Rahul was playing with his dog, while Sarma was trying to explain to him the issues in Assam.

Sarma was the key strategist in the 2011 election victory for Congress. His switch to BJP proved to be the gamechanger for BJP, which handed him over the reigns of the party.

5. Lack of dynamic leaders: The leadership of Congress in Assam was lacklustre. Neither did Rahul end up attracting crowds like Modi, nor was the charisma of Gogoi comparable to the likes of Sarma and Sarbananda Sonowal, who were striking a chord with the youth of the state.