Assembly Election 2022 Date Announced: Violation of Model Code of Conduct (MCC) could land the candidate in trouble or the election be declared void.

New Delhi:  The Election Commission of India (EC), on Saturday, announced the schedule for the Assembly elections in Uttar Pradesh, Punjab, Uttarakhand, Goa and Manipur. Polls in all phases will be done in 7 phases. While the election in Uttar Pradesh will be held in 7 phases from Feb 10 to March 7, polls in Punjab, Uttarakhand, and Goa will take place in single phase on February 14. Manipur to vote on Feb 27 and March 3. 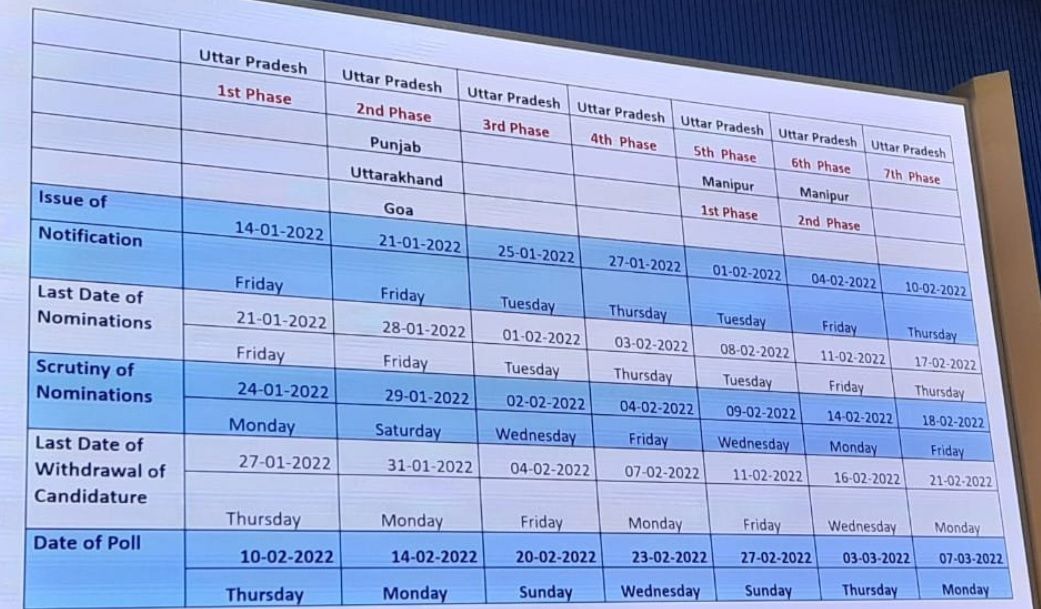 With the announcement of the election schedule, the Model Code of Conduct (MCC) came into force in these states. Along with other guidelines, the MCC bars the political parties from announcing policy decisions. “Model Code of Conduct (MCC) comes into effect immediately from the announcement of the schedules. Election Commission has made elaborate arrangements for ensuring the effective implementation of the MCC guidelines. Any violation of these guidelines will be strictly dealt with”, said Chief Election Commissioner (CEC) Sushil Chandra.

What is Model Code of Conduct or ‘Aachar Sanhita’

Soon after the announcement of elections in India (Central, state, or local), the Model Code of Conduct or the Aachar Sanhita comes into effect that applies to all political parties, the candidates and polling agents, the government in power, and all government employees. It remains in force till the declaration of final results.

This set of rules starts governing the conduct of political parties to prevent any use of unfair means by anyone whether incumbent or in opposition. All the political parties and candidates have to strictly adhere to it.

What happens when the code is violated?

Its violation could land the candidate in trouble or the election be declared void. On the basis of a complaint by another party or an individual, the poll panel issues notice to the political party or a politician for the alleged violation.  Either dismissing the charge or accepting that the MCC was violated the party or the person then has to reply in writing to the poll panel.