The Bharatiya Janata Party’s core group met in Delhi today. Prime Minister Narendra Modi called for the meeting as early as 10:30 in the morning to evaluate the results in Madhya Pradesh, Chhattisga

The Bharatiya Janata Party’s core group met in Delhi today. Prime Minister Narendra Modi called for the meeting as early as 10:30 in the morning to evaluate the results in Madhya Pradesh, Chhattisgarh and Rajasthan – states where the BJP seems to be heading out of power. Votes are also being counted for Telangana and Mizoram.Also Read - Yearender 2018: Elections And States That Congress Won This Year

‘Blame it on then EVMs‘ Also Read - Rajasthan: Ashok Gehlot Cabinet to be Expanded Today; 23 New Ministers Likely to be Inducted

In Telangana, the incumbent Telangana Rashtra Samithi (TRS) is heading for a landslide as trends indicate it is set to win 95 of the 119 seats. Chief Minister K Chandrashekhar Rao seems to have proved the pollsters right to the extent that most had predicted he’s headed back to power; where they got to wrong was the margin where most gave him between 60-70 seats and no one could predict this massive verdict. Also Read - NOTA Votes in 12 Rajasthan Constituencies Exceeded Victory Margin

The Congress in Telangana is pinning the blame of its poor showing on the EVMs. Its grand alliance with Chandrababu Naidu’s Telugu Desam Party (TDP) seems to have come to a cropper. “I am having doubts on results we’re getting in Telangana ballot paper counting. We doubt that tampering could have been done in the EVMs. Slips should be counted in VVPATs,” Telangana Congress chief Uttam Kumar Reddy said as leads firmly put the TRS ahead.

Congress CM Loses His Own Seats in Mizoram

In Mizoram, the Congress chief minister Lal Thahawla has lost from the two constituencies of Serchhip and Champhai South – a harbinger of his party’s fortunes that have dipped in the state. Serchhip was won by Zoram People’s Movement’s (ZPM) chief ministerial candidate Lalduhoma while he lost Champhai Sout to MNF’s TJ Lalnuntluanga.

Here the Mizo National Front (MNF), the main opposition party in the state and an ally in the BJP-led NDA at the Centre, is leading in 24 of the 40 seats in the state assembly and set to make a comeback to power after 10 years. The incumbent Congress looks likely to finish a distant second. It is leading in only 6 seats. 76-year-old Lal Thahawla has been the chief minister of Mizoram since December 2008.

Raje Voted Out in Rajasthan

Rajasthan Chief Minister Vasundhara Raje began her day by praying at the Tripura Sundari temple in Banswara district. But even the gods may not be able to guarantee her a second consecutive term in office. The Sachin Pilot-Ashok Gehlot combine seems to have delivered the state to the Congress.

The state Congress chief Sachin Pilot thanked his party chief Rahul Gandhi and all party workers for the results and said,” We should wait for the final results but it is almost certain that the Congress is back in Rajasthan with full power. We won 21 seats the last time but things have changed and how. We all worked together and no one person can take credit for these results.” Both Pilot and former Chief Minister Ashok Ghelot ducked questions on who will be the next chief minister. “It is a decision for the party president to make. We will see how it goes,” Ghelot said, adding that he was happy the Congress is where it is today.

Trends are now in for all the 199 seats in which polling was held on December 7. The Congress is leading in 100 seats and may look to other parties like the BSP and the RLP, and independents for support should they stop just short of the magic mark of 101 in the 200-member assembly. The BJP is ahead in 76 seats. Elections in Ramgarh constituency of Alwar district was deferred after the BSP’s candidate there died.

Rajasthan is a state that sends 25 members to Lok Sabha and in 2014, Vasundhara Raje had delivered the state to her party — all 25 MPs from Rajasthan were from the BJP. However, there have been setbacks in the by polls since then, and if these Vidhan Sabha results are any indicator then the Congress may win as many as 14 of the 25 Lok Sabha seats on offer from the state.

Raman Singh Fails to Make it Four in a Row

The BJP has even less to cheer in Chhattisgarh where Chief Minister Raman Singh has lost by a landslide, if trends are anything to go by. Of the 90 seats in the state that voted in two phases on November 2 and 20, the Congress is ahead in 64- that’s a two-thirds majority in the state assembly. The chief minister, who was himself is at risk after the initial rounds of counting, is now leading from his own constituency in Rajnandangaon. His nearest rival is the Karun Shukla, former Prime Minister Atal Bihari Vajpayee’s niece, who recently quit the BJP to join the Congress and was roped in for this prestige battle. 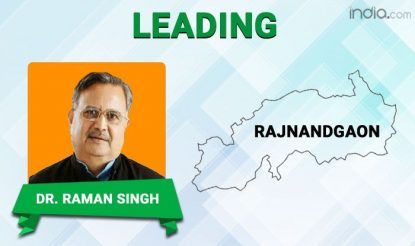 The big question now being asked in the power circles of Raipur is who will be the next chief minister. The state Congress president Bhupesh Bhagel and TS Singh Deo, a former royal and sitting MLA from Ambikapur are amongst the front-runners. Veteran Congressman and former Union Minister Charan Das Mahant is also in the fray, say observers.

Chhattisgarh had sent 10 BJP MPs to the Lok Sabha in both 2009 and 2014 but these results could have a significant impact on that number. If the trends of the Vidhan Sabha elections hold, then in 2019, the state may see as many has 7 MPs from the Congress and only 3 from the BJP.

The narrative isn’t all that different in neighbouring Madhya Pradesh where another BJP strongman – three-time chief minister Shivraj Singh Chouhan is facing defeat, albeit not a rout like the party is facing in Chhattisgarh. In Madhya Pradesh, the Congress is ahead in 109 of the 230 seats. Leads, that have yoyoed between the two main parties in the state since counting began at 8 AM, indicate the BJP is ahead in 110 seats, not a bad performance say observers, given that the anti-incumbency factor in the state was high after 15 years of BJP rule.

Speaking to Zee News, BJP’s national spokesperson Sambit Patra acknowledged the need for his party to introspect the results but expressed hope that the party may  be back in power in MP.

However, looking at 2019 Lok Sabha polls, these results are significant as Madhya Pradesh may see 14 Congressmen as members of the Lok Sabha if these Assembly Election results are anything to go by. In 2014, the BJP won 27 of the 29 Lok Sabha seats in the state – senior Congress leaders Jyotiraditya Scindia from Guna and Kamal Nath from Chhindwara were the only exceptions. Scindia, an erstwhile royal from Gwalior, is also one of the front-runners for the chief minister’s job. Kamal Nath today expressed confidence in his party winning a clear majority in the state.

Union Home Minister Rajnath Singh congratulated the candidates who are leading as the trends came in and said,” These elections were fought on the performances of the state governments. My congratulations to all those who are leading at this point.”

These results came in as the winter session of the Parliament began today. The results will add to a fillip to the voice of the Opposition parties as they look to build pressure on the PM Modi-government on a wide range of issues starting from the exit of RBI governor Urjit Patel to the controversy surrounding the Rafale deal. PM Modi assured Opposition of his government’s willingness to discuss all issues and said, “I hope members will spend their time in the house for the welfare of the people, not for themselves or their parties. This session is important; many issues of public importance will be taken up. I have faith that all the members of the parliament will respect this sentiment and move ahead. Our efforts are that discussions are held on all issues.”