Assembly Elections 2021: On Monday, the Madras High Court held the Election Commission responsible for the COVID-19 second wave in the country, calling it "the most irresponsible institution" and even said its officials may be booked under murder charges.

New Delhi: In the wake of the rising cases of coronavirus, the Election Commission on Tuesday banned all victory processions on or after the day of the counting of votes on May 2. The EC said that a detailed order will soon be issued. The move from the EC comes a day after the Madras High Court asked the poll body to prepare a blueprint of how Covid protocols would be followed on the day of counting.Also Read - Election Commission Removes Ban on Victory Processions, Relaxes COVID Guidelines. Details Here

On Monday, the Madras HC had pulled up the poll body for “not stopping political parties” from violating Covid protocols during their campaign rallies for Assembly polls in four states and a Union Territory over the last month. Also Read - Election Commission Of India To Review Ban On Physical Rallies In 5 Poll Bound States Today

The Madras High Court held the Election Commission responsible for the COVID-19 second wave in the country, calling it “the most irresponsible institution” and even said its officials may be booked under murder charges. Also Read - Electoral Bonds To Go On Sale From January 1, 2022. What Are Electoral Bonds And How Can A Donor Purchase Them?

Election Commission of India bans all victory processions on or after the day of counting of votes, on May 2nd. Detailed order soon. pic.twitter.com/VM60c1fagD

The EC allowing political parties to take out rallies and meetings had led to the spread of the pandemic, the court said. “Were you (living) on another planet,” the first bench of Chief Justice Sanjib Banerjee and Justice Senthilkumar Ramamoorthy asked the EC officials.

Here’s the copy of the EC order: 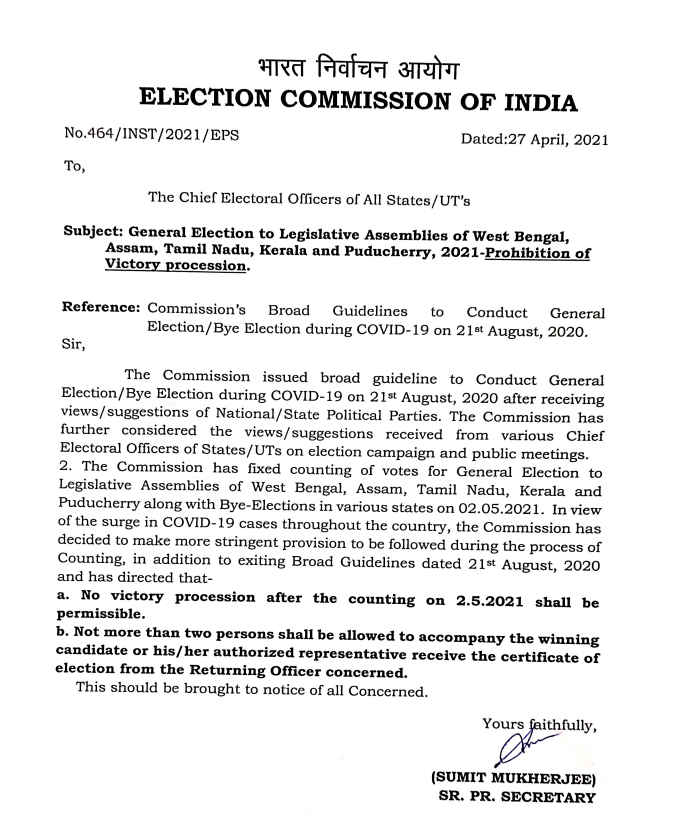 The bench made the stinging observation on a public interest writ from Karur AIADMK candidate and Transport Minister M R Vijayabaskar for the April 6 Assembly polls, seeking a direction to authorities to ensure fair counting of votes on May 2 in Karur by taking effective steps and proper arrangements with COVID-19 protocols.

Elections had been held in four states–Tamil Nadu, Kerala, Assam and West Bengal and the union territory of Puducherry and the counting of polled votes will be taken up on May 2. While voting is over in all the other states, the seventh of the eight-phase polling in West Bengal was held on Monday, with the last phase scheduled on April 29.

Earlier, the Calcutta High Court had expressed dissatisfaction with the EC over the enforcement of COVID-19 health safety norms during the ongoing West Bengal assembly election process, including campaigning.

There has been a slight dip in the daily cases as compared to the number of new infections reported in the past few days. The active cases have increased to 28,82,204 comprising 16.34 per cent of the total infections, while the national COVID-19 recovery rate has further dropped to 82.54 per cent.