The number of casualty in Bihar raised to 202 on Sunday and a report on Saturday stated that at least 153 had died in Assam.

New Delhi, August 20: With more than 400 deaths and crores affected across the states of Bihar, Assam and West Bengal due to massive floods, the situation in these states remained grim on Sunday. The number of casualty in Bihar rose to 202 on Sunday and a report on Saturday stated that at least 153 had died in Assam. West Bengal recorded 52 deaths as on August 19. Also Read - UP Shocker: 13-year-old Boy Sexually Assaulted by 2 Minors in Aligarh, Given Rs 20 to Stay Mum

According to Outlook, Bihar saw the massive flood affecting 1.21 crore people across 18 districts. In Assam, floods ravaged several low lying areas, including Kaziranga National Park, where 225 animals died due to the flood. Morigaon district of Assam was worst-hit with the damage of 1.23 lakh hectares of crop. 2,210 villages were submerged in the floods in Assam. Also Read - UP Gram Panchayat Election 2021: Last Few Days Left to Raise Objection, Final Reservation List of Seats to be Released on THIS Date

In West Bengal, more than 15 lakh people have been affected since July 21. On the other hand, 22 districts in eastern Uttar Pradesh and its 14 lakh people have also been affected. Also Read - Aatma Nirbhar: Viral Video Shows 98-Year-Old Selling Chana, Says 'Don't Want to Be A Burden on Kids' 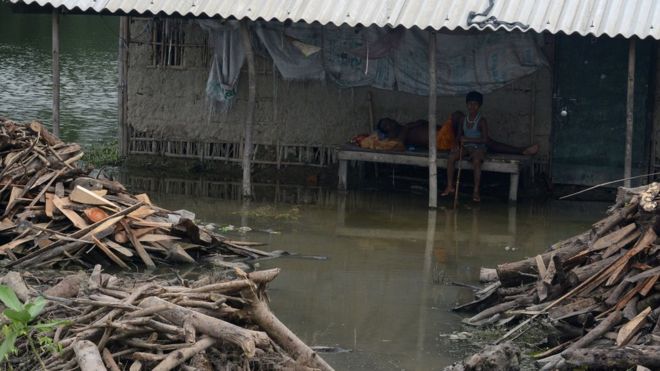 In Bihar, 4.22 lakh people have been shifted to 1,336 relief camps. While on Friday, the death toll was 153, by Sunday it rose to 202. 28 National Disaster Response Force teams comprising 1,152 personnel with 118 boats are involved in rescue and relief operations. While rescue operations are underway, 1,879 community kitchens are catering to 3.72 lakh people in several flood-hit areas. 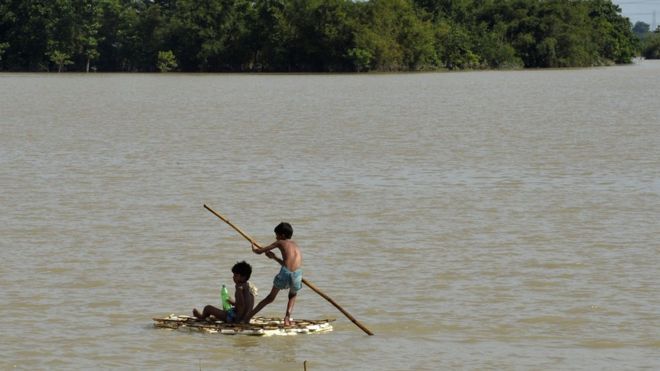 Children use a raft made of bamboo and plastics for transportation amid massive floods in Bihar. (Getty Image)

Earlier reports claimed that the railway link between Northeastern Indian states and the mainland has snapped due to submergence of tracks in several parts on Katihar and Alipurduar. This damage cannot be repaired before August 28, stated NF Railway CPRO Pranav Jyoti Sharma. 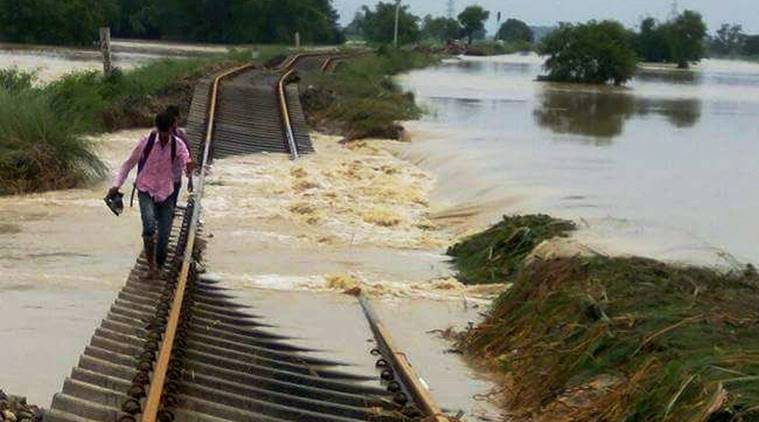 As per Indian Express, essentials commodities are being loaded at Kishanganj railway station for distribution into various parts of the region. Sharma told Indian Express that as the track between Dalkhola and Raiganj is breached, passengers can avail bus service between these two stations which are located near the National Highway.