53 aquatic birds, including herons and comb ducks among others, were found dead on the bank of Kharo reservoir in Manavadar taluka of Junagadh district on January 3. More than 1800 birds were found dead in Himachal's Pong Dam Lake on Monday.

Junagadh (Gujarat) [India], January 5: As many as 53 aquatic birds, including herons and comb ducks among others, were found dead on the bank of Kharo reservoir in Manavadar taluka of Junagadh district on January 3. The news comes in the backdrop of at least three states, Kerala, Madhya Pradesh and Rajasthan reporting Bird Flu positive cases. Bird Flu, a popular term for avian influenza, has also necessitated the culling of several birds across these states. Though, authorities have so far denied animal to human transmission this year. However, some experts say the bird flu disease is transmissible through contact with an infected bird’s faeces, or secretions from its nose, mouth or eye.Also Read - Alia Bhatt's New Pics: Karan Johar's 'Rani' Poses With 'Rocky' Ranveer Singh in London

Meanwhile, forest officers in Junagadh have handed the carcasses over to the workplace of a veterinary officer of Manavadar. Also Read - Sanjana Sanghi Is a Style Inspiration as She Nails Denim-on-Denim Look With Oversized Jacket and Circular Skirt, Guess The Price- PICS

“We suspect that the birds have died due to food poisoning. The carcasses have been sent for testing,” said veterinary doctor MJ Faldu. Also Read - Benefits Of Beetroot: Reasons Why You Should Include Beets In Your Diet - Watch Video

A family which was visiting the Kharo reservoir saw many birds lying lifeless on the site and immediately informed the Forest Department.

Meanwhile, in Madhya Pradesh, authorities were on high alert after over 100 crows were reported dead. Samples of the dead birds were being analysed in Bhopal’s High-Security Animal Diseases Laboratory (HSADL). The news has caused considerable stress among people who are already battling the coronavirus pandemic at various levels.

All zoological parks in the state have been alerted and ordered to use disinfectants and carry on sanitisation drive. 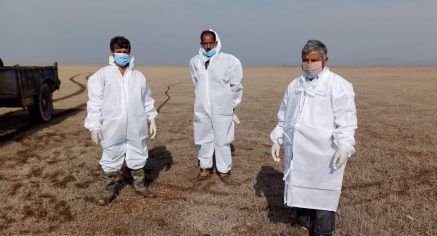 On Monday evening, over 1700 birds were found dead in Himachal Pradesh’s Pong Dam Lake. The Kangra district authorities later confirmed that majority of the dead birds were migratory and endangered birds. All tourism activities in Kangra’s Pong Dam lake have been suspended.

Meanwhile, Himachal Pradesh has banned the use of all poultry products like eggs and chicken in Kangra district.