Ayodhya Mosque to be Dedicated to Ahmadullah Shah, a Leader of Indian Rebellion of 1857

Last month, the IICF had unveiled the futuristic design of the mosque, incorporating a massive glass dome across a picturesque garden.

New Delhi:  The mosque at Dhannipur village in Ayodhya, which will be constructed on the five-acre plot in Ayodhya, as mandated by the Supreme Court, is likely to be dedicated to Ahmadullah Shah, a leader of the Indian Rebellion of 1857, Indo Islamic Cultural Foundation (IICF),the trust in charge of building the mosque confirmed this to a leading portal.
Also Read - UP Election 2022: CM Yogi Adityanath Likely To Contest from Ayodhya

“The trust is seriously contemplating on the proposal to dedidcate the Ayodhya mosque project to the great freedom fighter Maulvi Ahmadullah Shah. We have received suggestions from different platforms and will make an official announcement soon after deliberation”, Times of India quoted Athar Hussain, secretary of IICF as saying. Also Read - Ayodhya to be Connected Through Waterways With Other Destinations Soon - 5 Key Highlights

Meanwhile, the formal beginning of the project to construct a mosque will begin from tomorrow, January 26 by unfurling of the national flag and a tree plantation drive Also Read - Babri Masjid Demolition Anniversary: Security Tightened In Ayodhya, Mathura | All You Need To Know

The tree plantation drive has been planned because the project intends to serve the community in the area and create awareness about climate change as a major challenge to humanity, the IICF had said.

Last month, the IICF had unveiled the futuristic design of the mosque, incorporating a massive glass dome across a picturesque garden. 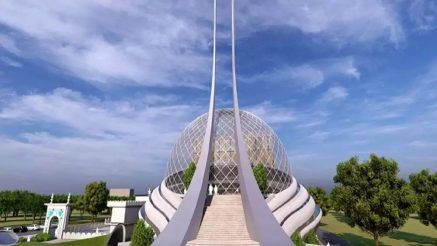 A view from the front of the planned mosque in Ayodhya (Photo credit: IICF)

The architectural design of the mosque complex includes a multi-specialty hospital, community kitchen, library and museum housed in a multi-storeyed vertical structure. The blueprint unveiled by IICF after the plan for the project was finalised by its architect Professor SM Akhtar. 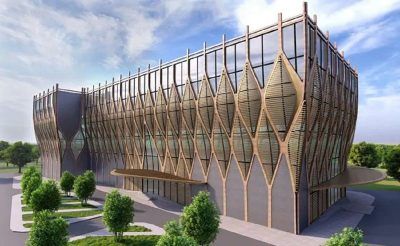 The planned hospital building behind the mosque in Ayodhya (Photo credit: IICF)

“The mosque will have a capacity to hold 2,000 namazis at a time, and the structure will be round-shaped,” the architect had said.

The mosque will be four times bigger than Babri Masjid and the 300-bed hospital will be six times the size of the mosque. 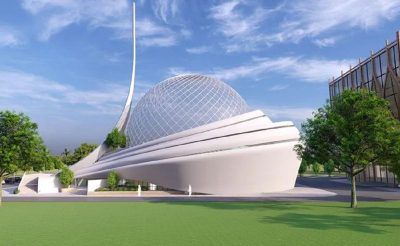 A view from the side of the planned mosque in Ayodhya (Photo credit: IICF)

AS for the design of the mosque, it will have a ‘cosmic’ or futuristic type of design which will resemble the spherical earth cushioned in space. It will not have stereotypical domes, minarets or arches that are associated with Islamic architecture in India. 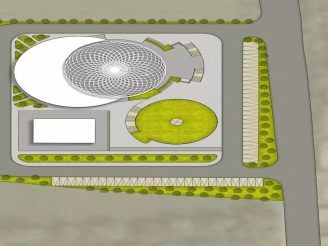 In February 2020, the Uttar Pradesh Sunni Central Waqf Board accepted the five acres of land provided for the construction of the mosque in Ayodhya.