Thousands of kar-sevaks had been gathering in Ayodhya since past few days. It was evident that something was going to happen on that day, however, the local administration had no idea that Ayodhya would be in headlines across the world in the next few hours.

New Delhi, Dec 6: December 6, 1992 – it was a sunny, wintry morning in Ayodhya, a small town situated on Saryu river in Uttar Pradesh considered to be Lord Rama’s birthplace. As the day progressed, quite a lot changed in Ayodhya and India forever. Also Read - Process for Mosque Construction Begins in Alternative Land for Babri Masjid

Thousands of kar-sevaks had been gathering in Ayodhya since past few days. It was evident that something was going to happen on that day, however, the local administration had no idea that Ayodhya would be in headlines across the world in the next few hours. Also Read - 'Historical Mistake' Corrected With Demolition of Babri Masjid: Union Minister Prakash Javadekar

Here’s a Brief Recap of What Happened on December 6, 1992 Also Read - Has Ayodhya Finally Moved On? No 'Shaurya Diwas' or 'Black Day' in Town on Babri Anniversary This Year

6:00 AM: Scores of kar-sevaks, locals started arriving at Babri Masjid, which several right-wing groups claimed was built on a site where a temple, which was destroyed by Mughal rulers, once stood. Security was heightened overnight at the site. (Also Read: Kapil Sibal Appears For Sunni Waqf Board in Ayodhya Case; Congress, BJP Spar)

10:30 AM: The police and jawans of Uttar Pradesh Provincial Armed Constabulary (PAC) were finding it difficult to control to ever-swelling crowd. The BJP, VHP leaders then decided to move a few distance away from where they were supposed to address a public gathering. There was a commotion at the site as the kar-sevaks started pushing the barricading put up by the local administration to prevent them from getting closer to the disputed site. Journalists present at the site later reported that slogans like “Mandir Yahin Banaengey” and “Jai Shree Ram” filled the air of Ayodhya.

11:00 AM: A batch of kar sevaks managed to push through the security cordon to enter the Babri Masjid premises. There are reports which claim that while the cops did little to stop the enraged kar sevaks, RSS voluteers, incharge of security at the site, were seen preventing them from the platform on which the 16th century mosque stood. (Also Read: Ayodhya Case: Supreme Court Defers Hearing to February 8, 2018)

11:30 AM: Barricades were breached at several points around the mosque. However, the then Faizabad SP DB Rai was reported assuring the journalists that nothing was going to happen and things were under control. A few minutes later stone pelting started at the site which provided cover to kar sevaks. A few men from the crowd manage to scale the mosque and reach on top of one of the three domes of the mosque. Meanwhile, stone pelting became heavier pushing security forces back from their actual position. 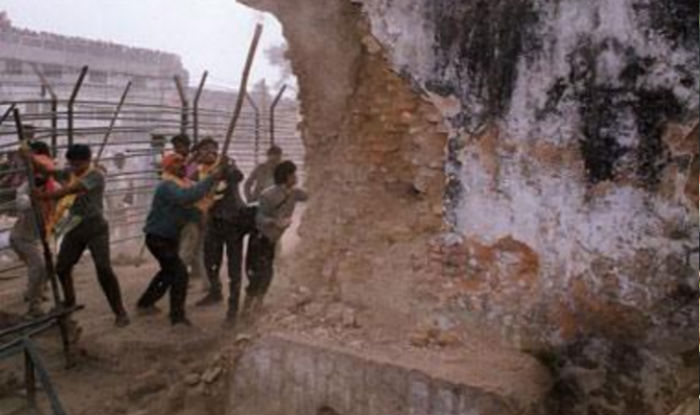 12:00 PM: All hell broke loose at the site as hundreds of kar sevaks, carrying saffron flags and iron rods, started breaking the domes and the base of Babri Masjid. As the mosque building was being demolished, top officials of Uttar Pradesh government and police officers could do nothing to control the situation. There were reports of the frenzied crowd attacking journalists and media teams present at the site.

12:30 PM: Reports claimed that Advani and Uma Bharti appealed to the kar sevaks to come back but the repeated appeals went unheeded. By 1:00 PM the first dome of the mosque collapsed engulfing the area in dust. The fury continued for over an hour.

4:30 PM: With two of three domes being razed to ground, the kar sevaks then targeted the main dome with hug wooden poles. The base of the mosque was attacked repeatedly weaking the centuries old structure further. A few minutes later Babri Masjid was collapsed triggering a huge celebrations at the site. 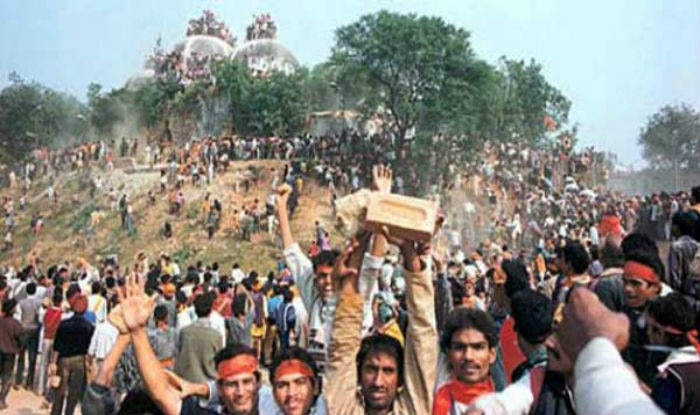 Curfew was imposed in Ayodhya and in several parts of Uttar Pradesh and India. The incident ignited communal riots across the country. At least 2000 people were killed in intercommunal riots which continued for months after December 6, 1992.

Every year on December 6, heavy security deployment is made in the twin towns of Faizabad and Ayodhya to prevent any untoward incident on the anniversary of Babri Masjid demolition. This year the VHP and the Bajrang Dal hav announced that they will observe ‘Shaurya Diwas’ (Day of Valour) while Muslim organisations plan ‘Yaum e Gham’ (Day of sorrow) to mark 25 years of Babri Masjid demolition.