In a tweet, the Union Minister also denied that the BJP state governments had resorted to shooting protesters. Speaking at a rally in Nadia yesterday, Ghosh, the BJP's West Bengal chief, had said that violent anti-CAA protesters in the state should be shot, just like in Uttar Pradesh, Assam and Karnataka.

Speaking at a rally in Nadia district on Sunday, Ghosh had slammed Chief Minister Mamata Banerjee for not cracking down on violent anti-CAA protesters, unlike police in BJP-ruled Uttar Pradesh, Assam and Karnataka. ” You will come here, eat our food, stay here and damage public properties. We will bash you with lathis, shoot you, and put you in jail,” Ghosh had remarked, triggering massive outrage.

Dilip Ghosh,West Bengal BJP President: You will come here, eat our food, stay here and damage public properties. Is it your zamindari? We will bash you with lathis, shoot you, and put you in jail. (12.1.2020) https://t.co/LcFZTrpYPj

Responding to Ghosh’s remark, Supriyo, the party’s Lok Sabha MP from Asansol, said, “BJP, as a party has nothing to do with what Dilip Ghosh may have said. It is a figment of his imagination and BJP governments in UP, Assam have NEVER EVER resorted to shooting people for whatever reason whatsoever. Very irresponsible of him to have said what he said,” Supriyo tweeted. 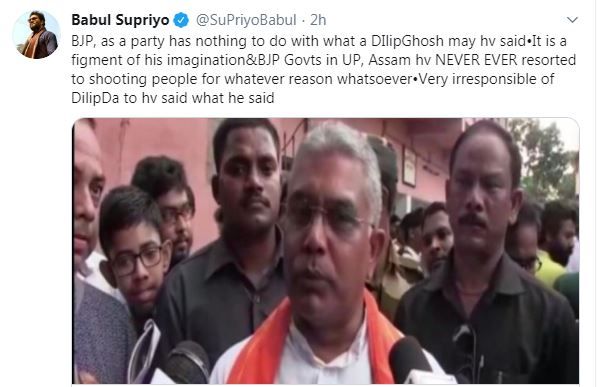