166 people had lost their lives when 10 Pakistani terrorists laid siege in Mumbai. They killed Moshe's parents, who ran a cultural and outreach centre for the Chabad-Lubavitch movement at the Nariman House in Mumbai's Colaba area.

New Delhi, Jan 16: Holtzberg Moshe was two years old when terrorists killed his parents–Rabbi Gavriel Holtzberg and Rivika– in the horrific 26/11 terror attack in Mumbai in 2008. He was saved by his Indian-origin nanny. Now, eight years after the incident in which he lost his parents, Baby Moshe, now 11 years old, has arrived in the place of his birth: Mumbai. He is visiting the city with Israel Prime Minister Benjamin Netanyahu on Tuesday.Also Read - Shiv Sena Disapproves of Pragya Thakur's Remarks Against Hemant Karkare

On 26/11, 2008,  Baby Moshe’s nanny, Sandra Samuels risked her life to save him from the terrorists. Now, she lives with him and his grandparents in Israel. Moshe had heard a lot from his nanny about the place of his birth and his late parents. In July last year, when Prime Minister Narendra Modi had visited Israel, Moshe had met the leader and wished to live in Mumbai. Also Read - Planned Strike on Terror Launch Pads in Pakistan Post 26/11 Mumbai Attacks But Didn't Get Government's Approval: Retired IAF Officer

“I hope I will be able to visit Mumbai, and when I get older, live there. I will be the director of our Chabad House,” Moshe had told the Indian Prime Minister. Also Read - 26/11: Amitabh Bachchan Says a Nation That Isn't United, Should Not be Called a Nation 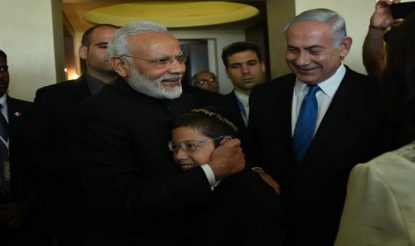 Modi had responded by saying, “Come and stay in India and Mumbai. You are most welcome. You and your all family members will get long-term visas. So you can come anytime and go anywhere”.

Israeli PM Netanyahu had asked Moshe to join him when he travels to India. When the PM chalked out his plan for India in 2018, he remembered his promise and invited Moshe’s family to visit Mumbai along with him.

“Moshe is very excited and at the same time emotional as he gets ready to leave for Mumbai on January 15. He is returning to his birthplace and is waiting to see many things connected to his late parents that he has heard about from us and his nanny. There are lots of memories,” an overwhelmed Rabbi Shimon Rosenberg, Moshe’s grandfather, had told PTI.

166 people had lost their lives when 10 Pakistani terrorists laid siege in Mumbai. They killed Moshe’s parents, who ran a cultural and outreach centre for the Chabad-Lubavitch movement at the Nariman House in Mumbai’s Colaba area.