Slamming the opposition-sponsored nationwide shutdown call, the BJP said that the Congress and its allies resorted to violence during the Bharat Bandh due to lack of support from the masses.

New Delhi: The ‘Bharat Bandh’ called by a united opposition, led by Congress president Rahul Gandhi, against the spiralling fuel prices hit normal life in some states on Monday with offices and educational institutes remaining closed and vehicles off the roads.

A two-year-old died in Bihar’s Jehanabad district allegedly due to the vehicle taking her to the hospital being stuck in protests. The child’s family alleged that the autorickshaw was stopped at many places which resulted in delay and led to her condition to deteriorate.

In Maharashtra and Bihar, petrol pumps and shops were forced shut by protesters. While Congress workers staged a rail blockade in Mumbai’s Andheri station, there were reports of stone pelting in some parts of Maharashtra.

At the Ramlila grounds, he was joined by former prime minister Manmohan Singh and top opposition leaders, Nationalist Congress Party’s Sharad Pawar and Loktantrik Janata Dal’s Sharad Yadav. UPA chairperson Sonia Gandhi was present at the rally but did not speak.

Slamming the opposition-sponsored nationwide shutdown call, the BJP said that the Congress and its allies resorted to violence during the Bharat Bandh due to lack of support from the masses.

Union Law Minister Ravi Shankar Prasad on Monday reiterated the Centre’s stand that the spike in price is not under government’s control, attributing the issue to global factors.

Slamming the violence during Bharat Bandh called by the Congress-led Opposition, Prasad said, “Everyone has a right to protest but what is happening today? Petrol pumps and buses being set ablaze, putting to risk lives. A child died after an ambulance was stuck in the protests in Bihar’s Jehanabad. Who is responsible?” he said.

Prasad slammed the shutdown called by the Congress-led opposition saying that the people are not in support of it. “Bharat Bandh has been unsuccessful; we condemn the violence being used to instil fear among citizens across the country,” he said.

“BJP believes that in spite of some momentary difficulty, the people aren’t in support of the Bandh. This is unnerving the Congress and other opposition parties,” he added.

Here is a state-wise look into the effect of the nationwide shutdown called by the Congress-led opposition:

A critically ill two-year-old girl died on Monday on her way to a hospital as Bharat Bandh supporters blocked roads in Bihar’s Jehanabad town.

Her father Majhi alleged that autorickshaw was stopped at many places which resulted in delay and led to her condition to deteriorate, adding that the child died before reaching the hospital. However, the authorities ruled out correlation between the bandh and the child’s death.

“There is no direct correlation with Bharat Bandh but generally,during a Bandh,frequency of vehicles is less.This may have caused little inconvenience.But even the family of the deceased said that ambulance wasn’t stopped due to Bharat Bandh,” said Alok Ranjan, DM Jehanabad.

Arson, vandalism and disruption of rail and road traffic were also reported from various parts of the state. 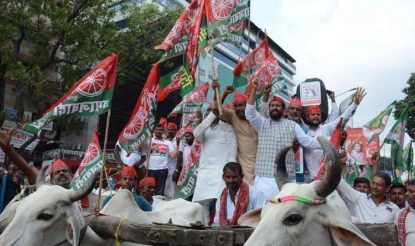 SP workers stage a demonstration during a nationwide shutdown protest or ‘Bharat Bandh’ against rising fuel prices called by opposition parties led by Congress, in Patna.

Private schools and a sizeable number of shopping establishments remained closed, fearing nuisance during the six-hour-long bandh which was also supported by the RJD, CPI and CPI(M).

Government offices and banks were, however, functioning normally and at some places, the bandh supporters were seen making way for ambulances and hearses.

The anti-fuel price hike shutdown evoked a mixed response in shutdown with the parties, barring the BJP and Shiv Sena, joining it wholeheartedly.

Protesters targeted buses and disrupted train traffic in some parts, but schools, colleges and offices remained opened in the state.

Workers from several political parties, including the Congress and the MNS, briefly disrupted transport services by stopping suburban trains and metro rail at various places in Mumbai. 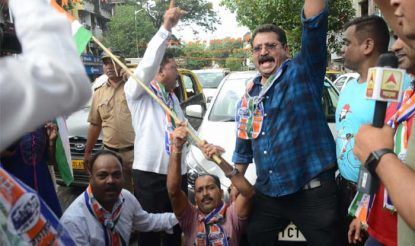 Auto-rickshaws and taxis were plying in limited numbers and local trains were less crowded compared to normal weekdays. In Mumbai, schools, colleges, banks and offices remained open though attendance was reported to be thin.

Normal life was thrown out of gear in several parts of the state during the nine-hour shutdown.

In Bengaluru, roads wore a deserted look since morning as government buses, private taxis and most of the autorickshaws did not ply. Business establishments, shops, malls, certain private enterprises remained closed.

The shutdown was successful in many other parts of the state including Tumakuru, Ramanagar, Mandya, Channapatna, Hassan, Mangaluru, Chamarajnagar, Mysuru. Hubballi, Bidar and Kolar.

Vehicles were off the roads and shops and businesses were closed in the Left-ruled Kerala, which is observing a 12 -hour strike instead of the 9 am to 3 pm shutdown called by the Congress and other parties.

Attendance in government offices was thin and many people were stranded at bus terminuses and railway stations. A few shops that had opened in the morning were forcibly closed by bandh supporters as the day progressed.

All flood relief works, essential services, tourism industry and transportation of the sick to hospitals were kept out of the purview of the bandh.

While the MP Congress workers called the shutdown successful, the ruling BJP accused the former of adopting “anarchic” ways to intimidate people to enforce the bandh.

Congress workers carried out rallies and hold protests outside commercial establishments and fuel pumps that were open. 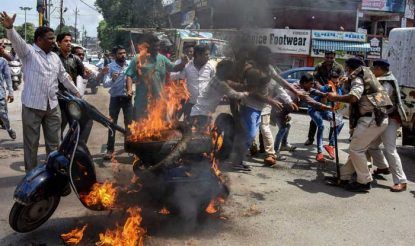 In Bhopal, a flower shop owned by Madhya Pradesh Chief Minister Shivraj Singh Chouhan’s son Kartikey was at the centre of a protest by Congress workers.

A scuffle was reported between Congress workers and police in Ujjain’s Chimanganj area after the former forcibly tried to shut down a petrol pump.

Train services in the state were hit as Congress workers blocked railway tracks in many places, including Bhubaneswar, Cuttack, Keonjhar, Khurda Road, Paradip, Balasore and Bhadrak, to enforce the shutdown from 6 am to 3 pm.

The ‘rail roko’ programme left a large number of passengers stranded at railway stations in different places after 10 trains were cancelled and several others delayed.

Shops, markets, business establishments and educational institutions remained closed across the state during the 9-hour-long shutdown, while attendance was thin in offices. Employees were seen reaching banks and offices early in the morning.

Emergency services, including ambulance, medicine shops and vehicles carrying milk, have been kept out of the purview of the bandh.

Examinations scheduled for the day were cancelled by the Biju Patnaik University of Technology (BPUT).

The shutdown evoked a mixed response in Gujarat with the party calling the shutdown successful while the police claimed it had no major impact.

Schools were shut in areas including Ahmedabad, Rajkot and Mehsana and there were reports of Congress workers forcing petrol pumps to down shutters in some parts of the state.

Roads in some areas, including Chhotaudepur and Surat, were blocked with burning tyres by protesting Congress workers while bus services were affected in many areas like Rajkot, Amreli and Ahmedabad.

The shutdown had little impact on normal life in Uttar Pradesh Monday as most commercial establishments and educational institutions operated as usual, while Chief Minister Yogi Adityanath slammed the Opposition for having a “negative thinking”.

Amidst tight security by the state government, commercial establishments, offices, schools and colleges operated as per their regular schedule and vehicular traffic in main towns and cities of the state remained unaffected by the bandh.

“This (bandh) is a manifestation of their (opposition parties) negative thinking. India is rising as the biggest economy in the world under Prime Minister Narendra Modi. Welfare schemes are being launched, people are getting benefits. In such a scenario, nothing else can be expected from the desperate and demoralised opposition, which has no leadership or plans or strategy for the future,” Adityanath told reporters in Lucknow.

“May God bless them and give them wisdom… They should cooperate on the issue of development and play a positive role instead of adopting a negative approach, otherwise they will not be able to sit even in the opposition,” he said.

Normal life remained unaffected in Delhi with offices, schools and colleges opening at their regular time and vehicles plying on roads despite the shutdown call.

Traffic movement was normal across the city. However, roads leading to Rajghat and Ramlila Maidan where Congress president Rahul Gandhi and senior party leaders, including Sonia Gandhi and Manmohan Singh, held a protest witnessed heavy traffic.

Police sources said government buses were plying as usual even as educational institutions and a large number of shops and commercial establishments remained open.

The bandh had little effect in Punjab and Haryana with party workers staging demonstrations against rising fuel prices.

Only a few shops were shut down and no untoward incident being reported as sufficient security arrangements were made by the police to maintain law and order, police said. 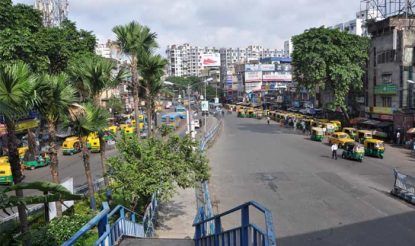 The Congress had called the bandh in the state for six hours from 9 am, while the CPI(M)-led Left Front called a 12-hour bandh starting from 6 am.

Almost all schools and colleges were open with the scheduled examinations underway and the office-goers were seen rushing to office.

Additional police personnel were deployed in the state to ensure that there was no disruption or violence in connection with the bandh call.

All shops and business establishments including banks and educational institutions were closed in the state and private vehicles were off the road.

The protesters burnt tyres in many places in the state capital and in various other places to block roads.

Public vehicles remained off roads, while stones were thrown at a Tamil Nadu government-owned express bus and a private college vehicle.

More than 300 people belonging to different political parties, including the youth wing of the ruling Congress, were taken into custody when they attempted to stage a protest at the bus terminal and also at some central government offices.