Unfazed by the Opposition's attacks over allegedly favouring Robert Vadra in land deals, Haryana Chief Minister Bhupinder Singh Hooda today took on his detractors wondering why they have not approached the Lokayukta or the courts 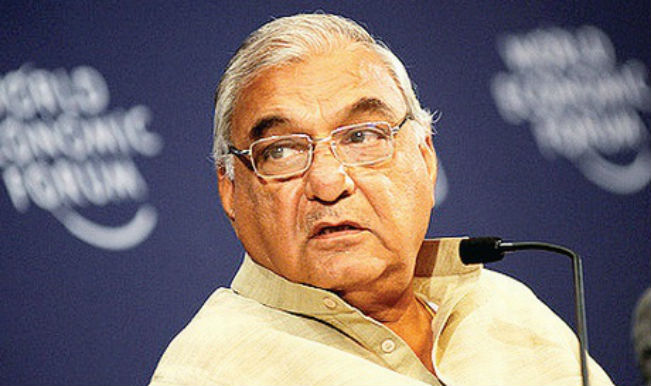 New Delhi, Sept 29: Unfazed by the Opposition’s attacks over allegedly favouring Robert Vadra in land deals, Haryana Chief Minister Bhupinder Singh Hooda today took on his detractors wondering why they have not approached the Lokayukta or the courts. “I have not favoured anybody. It is all false propaganda,” he said. Hooda, who is hoping to win assembly elections for the third time, also took on the Centre over the demand for substantial raise in Minimum Support Prices of paddy and wheat that has not found favour with the Narendra Modi government. Also Read - Former Union Minister Jaswant Singh Passes Away; PM Modi, Rajnath Express Grief

“I am holding a constitutional post. I cannot do what Arvind Kejriwal did as Delhi Chief Minister (by going on a dharna). But I can take any stern step for the cause of farmers,” he said without elaborating. Hooda told PTI that he had written to Prime Minister over the plight of wheat and paddy growers in the state and had sought substantial hike but the government has rejected his demand. To questions about the campaign launched by the BJP that he had allegedly benefited the son-in-law of Sonia Gandhi, he remarked, “I have not favoured anybody. I have not allotted even an inch of land to any builder. It is all false propaganda. There are institutions in the state. There is a Lokayukta and there are courts. They should have approached….” Also Read - Bihar Assembly Elections 2020: NDA is One, Will Contest Polls Together, Says Ravi Shankar Prasad

Hooda also hit out at two key leaders of the Om Prakash Chautala led INLD for accusing him of graft. He said he would be filing criminal and civil suits against them “to expose their lies”. Steering clear of questions as to whether BJP or INLD was the Congress’ main rival in the October 15 polls, he ridiculed INLD over its declaration that Chautala, who is in jail, will be its CM candidate.

“This means those who want to meet the Chief Minister of the INLD will have to commit an offence and go to jail. The INLD should not make mockery of rule of law and misguide the people. Even Jayalalithaa bowed out of office following an adverse verdict,” he said referring to the former Tamil Nadu Chief Minister, who was convicted in an illegal assets case.

Despite Congress winning only one out of 10 seats in the Lok Sabha polls with BJP gaining seven and INLD two seats, Hooda denied suggestions that he was facing “double anti-incumbency” for being Chief Minister for ten years. “Whatever had happened in the Lok Sabha polls was due to the surcharged atmosphere created in favour of a particular individual who had projected that he has the magic wand to solve all the problems facing the country”, he said adding that rule by Narendra Modi for just three months has shown that he was a “failure” on all fronts including in containing price rise.

The Congress leader claimed that in such a scenario, the BJP is in for a huge shock in the state. He wondered as to why BJP is not projecting a CM candidate in Haryana when it has done so in all states ruled by the party. The bypoll results in Uttarkhand, Uttar Pradesh, Bihar Rajasthan and Gujarat were indicative of which way the political winds were blowing, he said.