Bihar Chief Minister Nitish Kumar announced the relaxations of curbs imposed in the state and said that from now on, cinema halls, clubs, gyms, swimming pools, restaurants and food stalls can be reopened with 50% capacity.

Patna: Owing to the dip in the Covid cases in the state, the Nitish Kumar-led Bihar government on Wednesday has decided to ease the restrictions further. Taking to Twitter, Bihar Chief Minister Nitish Kumar announced the relaxations of curbs imposed in the state and said that from now on, cinema halls, clubs, gyms, swimming pools, restaurants and food stalls can be reopened with 50% capacity.Also Read - Blast in Bihar: Explosion Reported in Oil Refinery; 15 Injured, 8 in Serious Condition

In a series of tweets, the Bihar CM stated that the COVID-19 situation in the state has been reviewed. And, given the improvement in the situation, the state government has decided to open all shops, establishments, shopping malls, parks, gardens, and religious places. He further added that all such establishments and facilities can now operate normally. Also Read - Good News: Ahead of Possible COVID Third Wave, BMC’s Sero-survey Finds 70-80% Population Have Antibodies

With the permission of the district administration, all kinds of social, political, entertainment, sports, cultural and religious events can also be organized with the required COVID-19 protocols, he said. CM Kumar also added that the state government permitted all universities, colleges, technical institutes, and schools from classes 1 to 12 to reopen. Coaching institutes can also start functioning now. Also Read - Govt Stresses on Vaccination, COVID-Appropriate Behaviour, Responsible Travel as Festive Season Nears 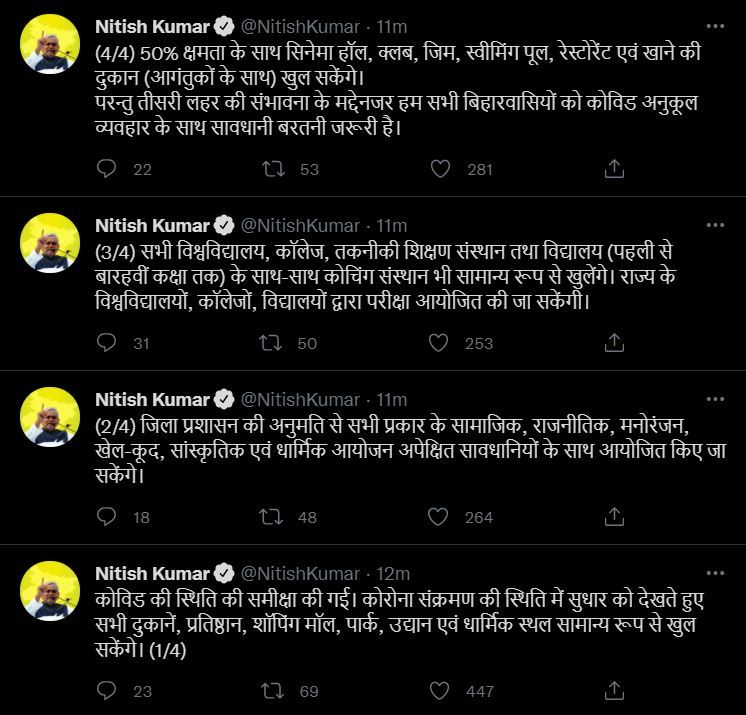 The state government has allowed universities, schools and colleges to hold examinations as well. It was also decided to reopen cinema halls, clubs, gymnasiums, swimming pools, restaurants and eateries. However, these have been allowed to operate at 50 per cent capacity as of now.

CM Nitish Kumar announced the COVID-19 unlock measures as the state now has just a total of 102 active coronaviruss cases. A total of 7,15,853 people have recovered from the disease in the state while 9,650 people have succumbed to the virus there.