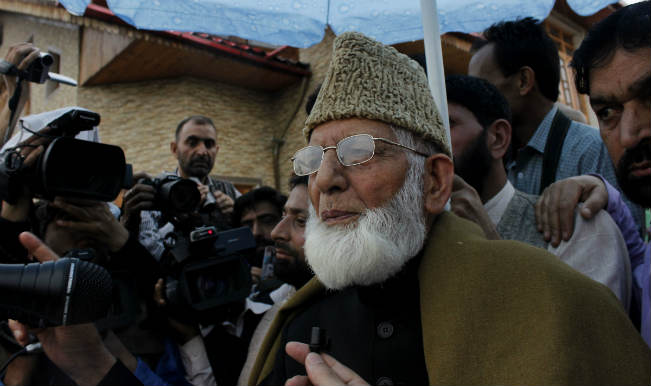 BJP’s denial to give Indian passport to Syed Ali Geelani, the chairman of Hurriyat faction in Jammu and Kashmir has created a rift between ruling coalition — BJP and PDP — in Jammu and Kashmir. The issue worsened after BJP openly denied passport to Geelani, who wanted to visit his ailing daughter Farhat Jabeen Geelani, in Jeddah, Saudi Arabia. Also Read - Centre's 'Operation halt' a joke, claim separatists

BJP also sought apology from the Separatist leader for his anti-India activities. BJP Spokesperson, Khalid Jehangir reportedly told the media that passport cannot be given to Geelani until he apologises for the mistakes committed by him in the past 25 years. He further said, ” Passports are issued to Indian citizens and not the ones who don’t believe in India and its democracy. If Geelani Sahib wants the passport, then has to fall in the line and follow law of the land,” BJP spokesman Khalid Jehangir was quoted as saying. Also Read - Junaid Ashraf Wani, Son of Separatist Leader Syed Ali Geelani's Successor, Joins Hizbul Mujahideen; His Photo Wielding Rifle Appears on Social Media

Jehangir further said Geelani will be issued Indian passport only if he acknowledges that he will stay away from anti-India activities. A BJP spokeperson was quoted saying, “The Government of India cannot give a passport to a person who spews venom against the country where he lives and enjoys all the comforts” (READ: Jitendra Singh condemns Syed Ali Shah Geelani’s waving of Pakistan flag at Tral rally)

Talking about the issue PDP leader, Mehboob Beig said, “This is a human issue where SAS Geelani wants to see his daughter, my party has no issues in this.” He also said that they have been debating over this for last 3-4 days and stated that a non issue is being made an issue.

This is a human issues where SAS Geelani wants to see his daughter, my party has no issues in this: Mehboob Beig, PDP pic.twitter.com/giyPiJaH6m

However, Chief Minister Mufti Mohammad Sayeed said that he will consider Geelani’s request on humanitarian grounds.