Sena hinted that it might take a call alliance with the BJP on October 30, ahead of the swearing-in of Devendra Fadnavis as Maharashtra Chief Minister. 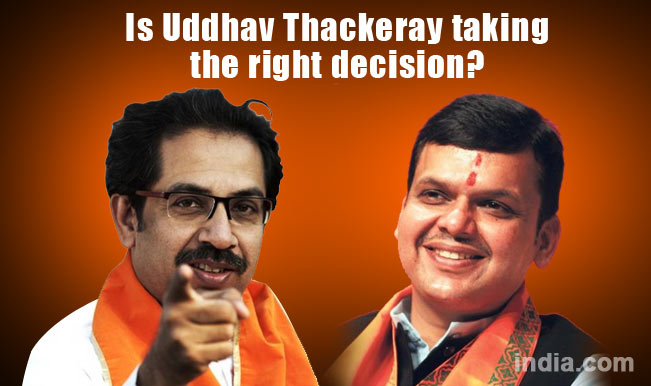 After Devendra Fadnavis of the Bharatiya Janata Party (BJP) was announced as the Chief Minister designate of Maharashtra, the Shiv Sena hinted that it might take a call on an alliance with the BJP on Thursday, October 30 – ahead of the swearing-in of Fadnavis and his ministers at the Wankhede Stadium in Mumbai on Friday, October 31. Read–Devendra Fadnavis selected as Maharashtra Chief Minister by Bharatiya Janata Party Also Read - Maharashtra Revises Guidelines For Passengers Arriving In State Amid Omicron Threat | Check Details Here

On Wednesday, October 29, Shiv Sena MP Sanjay Raut told reporters, “We met (Shiv Sena chief) Uddhav Thackeray and discussed the future course of action with him. The wait is over now, just one more day. We will announce our decision tomorrow.” Also Read - CBSE Class 12 Board Exams 2021: Board Acknowledges Error in Sociology Paper on 'Gujarat Violence', to Take Action Against Paper Setters

In an editorial on October 30 in Sena’s mouthpiece Saamna, Raut reached out to the BJP but warned it against taking the Nationalist Congress Party’s (NCP) support. Sena spokesperson Neelam Gorhe said, “Discussions are on within the party. Uddhavji will take a final call (on whether to join the BJP-led ministry).” Read-Finally, Shiv Sena welcomes Devendra Fadnavis as new Chief Minister

However there is difference of opinion within the party. Some senior leaders believe that Shiv Sena should support BJP. For about 15 years the party was out of power in Maharashtra but had the Sena’s support. Today, the young leaders of Shiv Sena intend to use the opportunity and taste power. At this moment, the Sena party members strongly feel the absence of late Shiv Sena supremo Bal Thackeray and his firm decisions.

Umesh Mohite, journalist and Sena watcher, said to The Indian Express, “A number of Sena leaders have been out of power too long. The ambitions of the younger lot are high. It is these leaders who are driving the Sena leadership in cosying up to the BJP. Joining hands with the BJP will ensure the party stays intact for now.”

While some in the Sena believe that BJP doesn’t treats them with dignity. If Uddhav Thackeray gives support to the BJP, these anti-BJP members might leave Shiv Sena. “We will not play even second fiddle. We will be like a small instrument at the back of the orchestra whose sound is not even registered by the audience,” said a senior Sena leader to The Indian Express.

He further said, “The BJP is sparing no opportunity to humiliate the party. Imagine what they will do for five years when we are subservient to them. If the cadre gets disheartened by the BJP’s behaviour and decides to quit, the cadre-based party will be finished.”

Some Shiv Sainiks have put up billboards for their leader Uddhav Thackeray, saying  “Swabhiman Dakhva (Show some self-respect).”

However, Shiv Sena MP Gajanan Kirtikar said to The Indian Express, “We are a disciplined organisation. The cadre will abide with whatever decision the party president takes.”

Some members of the party feels that Sena could revive lost ground if it plays the role of a constructive opposition. A senior Sena leader said to  the paper, “Generally the second largest party in an assembly plays the role of the opposition.” Generally, the Sena feels the party should take up people’s issues again. That way, it would be able to again carve out a space for itself and perform better in the next elections.

BJP has 122 seats in the 288-member Maharashtra assembly and it needs 23 more legislators to gain majority. Elected BJP legislator Govind Rathod (Nanded district) died of a heart attack on Sunday, October 27. With the support of small parties and independents, the BJP’s tally is around 135.

On the day the Maharashtra Assembly Election results were declared, NCP had offered unconditional support to the BJP with its 41 MLAs. The BJP was reportedly even prepared to run a minority government.

BJP general secretary J P Nadda, in charge of Maharashtra, said that his party wants to take the Sena along. A top BJP leader at the Centre, when asked by The Hindustan Times if there was any headway in discussions with the Sena, said talks would resume only after the oath-taking ceremony on Friday, October 31.

The Sena has zeroed in on the names of some of its legislators for the Leader of Opposition position in the Maharashtra Assembly. According to Sena leaders, the BJP is asking them to be a part of the government without any concrete proposal, and that is unacceptable to Uddhav Thackeray. “If we are going to be part of the government, then we should know how many ministries we will get. We need our ministers to be sworn in along with the BJP ministers,” said Thackeray.

A senior Sena legislator said, “Right now, all the BJP has said is ‘come on board and then we will decide’. The Sena doesn’t want to seem like a beggar. It has been conveyed to Uddhavji that we are ready to sit in the opposition.” He even said that Sena chief did not want to seem as being “unreasonable” by refusing to speak with the BJP.

With so much confusion in the party, the question is: Is Uddhav Thackeray taking the right decision by forming an alliance with the BJP in Maharashtra?