‘Borders in a Bedroom’ Offers a Unique Perspective into Relationships

The play was showcased as part of the lineup at Tamasha, a Festival for South Asian Performing Arts last week

A romantic relationship between two people often brims with numerous types of conversations, full of playful innuendo or intense with perhaps a measured tone of scrutiny.Also Read - Happy Birthday, Ranbir Kapoor: From Saawariya to Sanju, Here’s How The Actor Evolved in Bollywood

There are those momentous conversations that may have you looking at your partner thinking, “who the hell am I with?” Yet other pivotal conversations may have you falling in love all over again with your significant other. Also Read - It Took 5 Whole Years For People to Appreciate Tamasha Starring Deepika Padukone And Ranbir Kapoor

There is a whole gamut of emotions and revelations to be had at any point when one is a part of a coupledom. This gamut is beautifully captured in the play “Borders in a Bedroom.”
Also Read - Singapore Fan Thanking For Removing Stigma Around Mental Health is Basically All Deepika Padukone Fans!

The play demonstrates “how deeply entrenched views about the complexities of the outside world can permeate even the most intimate of relationships.” In particular, these complexities permeate the relationship between a couple made up of the romantic duo Maya and Imran.

Maya, played by Shivali Bhammer (who is the playwriter as well!) breathes a sensual and charming dimension to her character. Maya is a painter and convivial free spirit who prides herself on being unattached to the archaic notions of love and institutionalized marriage.

Her boyfriend Imran, played by the chiseled Shezi Sardar (he remains shirtless in many scenes which sat well with audience members), is an architect who has a passion for design that goes well beyond architecture. He aspires to build a life with Maya consisting of marriage and children and is keen on following a more conventional trajectory of hetero-desi couples.

The gap between Maya and Imran’s worldviews is further widened when “shit gets real” as the saying goes. What starts out as innocent and almost playful lover’s spat quickly plunges into darker conversations about “religious disparities, philosophical differences, nationalism, and ultimately, love” leaving the couple frustrated and dejected.

You see, Maya is an Indian-Hindu brought up in the UK and Imran is a Pakistani-Muslim in America. And though their respective religions clearly weren’t deterrents in them dating—they are a couple after all—these labels rear its head into what makes for a series of heated debates. 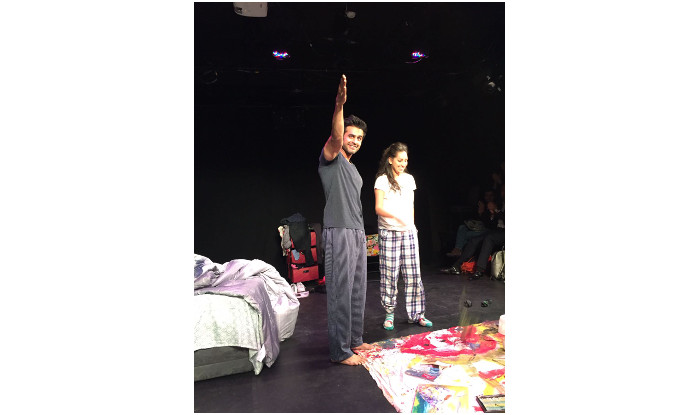 “Borders in a Bedroom” captures a lot of things in its hour-long run. It aptly captures the everydayness so to speak of relationships and the intricacies of sharing physical and emotional space with another human being.

Yet it also shows the more philosophical challenges two people may face when questioning if they are “right” for one another and what that means when put into the context of upbringing, culture, and religion.

I’ve seen my fair share of Bollywood movies that have the two leads coming from two very different backgrounds; the Pakistani-Indian/Muslim-Hindu unrequited love affair is a rather played out trope in Bollywood.

What’s more, these love stories are often placed in a historical time of war where the lovers’ love is untouched by political perversions with a sometimes overly-saccharine love conquers all sentiment. Or, one or both lovers die i.e. are murdered because their respective communities take offense to their love, which pretty much serves as a subliminal, or perhaps not so subliminal message of nationalism first and romantic love, well, never.

“Borders in a Bedroom” does away with such tropes of cautionary tales, neat and tidy solutions, or even violent endings. This play shows that sure, on some level, love may conquer all; but even then love, in all its glory, doesn’t do away with stereotyping and presumptions we may subject a person to even when the other person is someone we love and care about dearly.

This play goes where Bollywood could never go—it delves into social conditioning and the romanticizing and vilifying of the “other.” It also makes these conversations more real because it’s not set in, say, the era of partition.

These conversations take place in the here and now, in a New York apartment between two people who have their fair share of emotional baggage; they also carry the baggage of living amidst a xenophobic culture that makes its way into the sanctuary of their bedroom.

“Borders in a Bedroom” is a must-see if you’re looking to be both entertained and aroused by the ups and downs of a relationship other than your own!

It was showcased as part of the lineup at Tamasha, a festival for South Asian Performing Arts, last week. Luckily, you’ll be able to catch it again. “Borders in a Bedroom” was offered a producing contract with Hypokrit Theatre Company and will return to the stage early next year. Stay tuned for more details!