New Delhi: The Bharatiya Janata Party (BJP) has released its second list of 10 candidates for the forthcoming Delhi Assembly election 2020, scheduled to be held on February 8. The list was reportedly announced after midnight following the announcement of Siromani Akali Dal (SAD) to not contest the Delhi polls over differences with ally BJP regarding the implementation of contentious Citizenship law and the nationwide NRC (National Register of Citizens). Also Read - Delhi Assembly Election 2020: BJP Releases First List of 57 Candidates, Kapil Mishra to Contest From Model Town

Among the prominent leaders in the list of candidates are Sunil Yadav, who has been fielded from New Delhi constituency to take on CM and AAP convener Arvind Kejriwal. The list also includes the name of Delhi BJP spokesperson Tajinder Pal Bagga. He has been fielded from Hari Nagar. Besides, party”s Purvanchal Morcha president Manish Singh has also been named in the list to contest from the Delhi Cantonment constituency. Also Read - Watch: BJP Releases Video of Artists Praising CAA; Juhi Chawla Joins BJP's Protest

Notably, the BJP announced its candidates on all four seats that traditionally went to its ally SAD in the previous Assembly elections in Delhi. 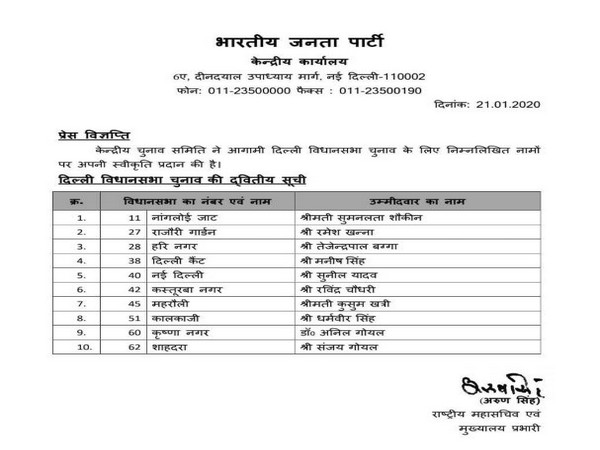 On January 17, the BJP had announced its first list and gave tickets to 57 candidates including rebel Aam Aadmi Party leader Kapil Mishra. The party  has left three seats for its alliance partners JD(U) and Lok Janshakti Party (LJP). The JD(U) will contest from Burari and Sangam Vihar constituencies while LJP will fight from the Seemapuri seat.

The national capital will witness a triangular contest between ruling AAP, BJP and Congress. Many political analysts believe that the BJP and Chief Minister Arvind Kejriwal-led AAP are likely to be the main rivals in most of the seats in Delhi.