In the letter to Congress High Command Sonia Gandhi, Sidhu said that he cannot compromise on Punjab’s future and the agenda for the welfare of the state.

Chandigarh: In a surprising move, Punjab Congress chief Navjot Singh Sidhu on Tuesday tendered his resignation from the post and said he will continue to serve the party. In the letter to Congress High Command Sonia Gandhi, Sidhu said that he cannot compromise on Punjab’s future and the agenda for the welfare of the state. Notably, Sidhu was being seen as a major contender for the Chief Minister face in the upcoming assembly elections in Punjab.Also Read - Chandigarh Airport To Launch its First Cargo Services From November, With Reasonable Rates | Details Here

The move from the leader comes barely 10 days after Captain Amarinder Singh stepped down as the state chief minister. Taking to Twitter, Sidhu made the announcement and shared the letter he had written to Congress President Sonia Gandhi. Also Read - ‘Stop Talking About Secularism’: Amarinder Singh Slams Congress, Questions Alliance With Sena

“The collapse of a man’s character stems from the compromise corner, I can never compromise on Punjab’s future and the agenda for the welfare of Punjab. Therefore, I hereby resign as the President of Punjab Pradesh Congress Committee,” Sidhu said in his letter sent to Gandhi. Also Read - Priyanka Gandhi Vadra Promises Smartphones, Scooty to Girls in UP if Party Comes to Power in 2022 Assembly Elections

Copy of the resignation letter: 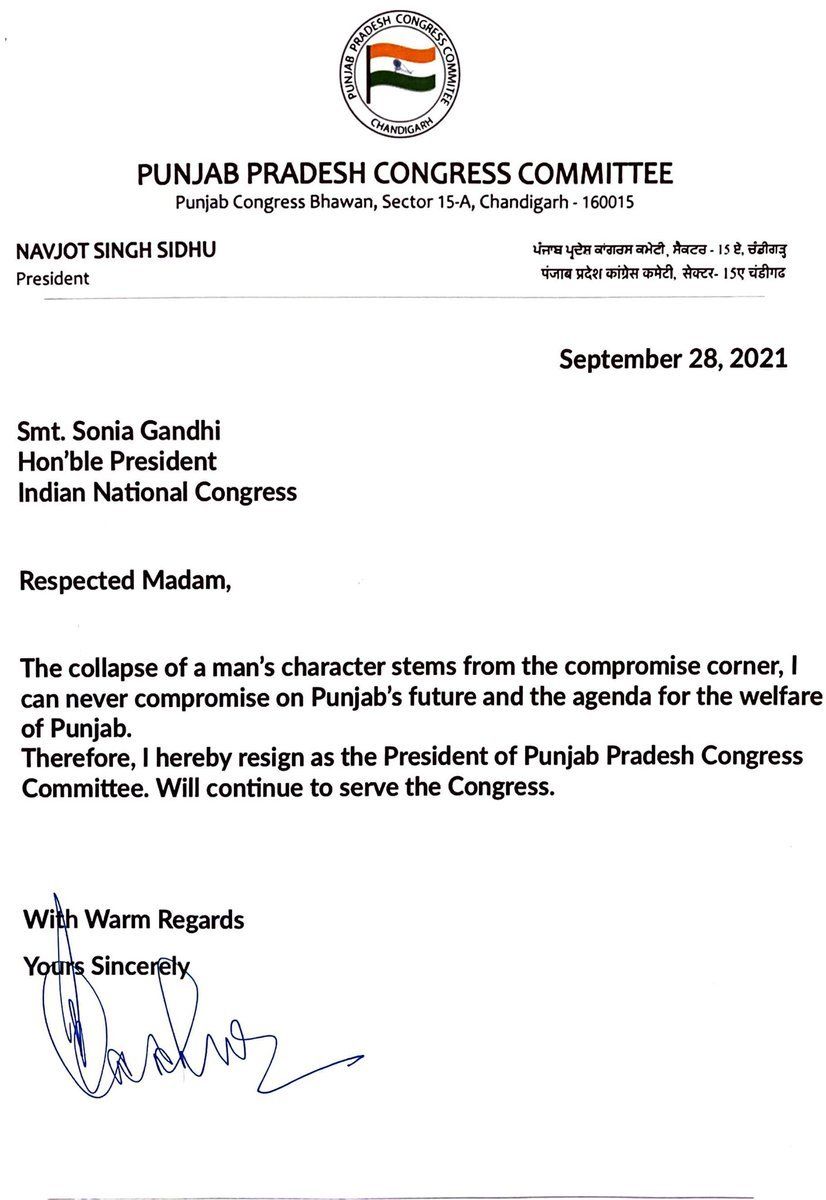 The decision from the veteran leader comes ahead of former Punjab Chief Minister Amarinder Singh’s Delhi visit amid speculation about his future course of action. Notably, this is Captain Singh’s first visit to the national capital after he resigned on 18 September.

Here are the Updates:

10: 56 PM: Patiala: Punjab Ministers Pargat Singh and Amrinder Singh Raja Warring meet Navjot Singh Sidhu who quit as state party chief earlier today “There are some minor issues, that arose out of some misunderstandings and will be resolved tomorrow,” says Minister Warring.

10:30 PM: Navjot Singh Sidhu’s resignation (as Punjab Congress Chief) has not been accepted, the matter will be resolved soon. There are 3-4 issues, they are being discussed in the party forum, high command will resolve them: Congress MLA Bawa Henry

9:09 PM: Sunil Jakhar, former president of the Punjab Congress, reacted to Navjot Singh Sidhu’s resignation in a tweet on Tuesday. Jakhar said, “It’s just not cricket ! What stands compromised in this entire ‘episode’ is the faith reposed in the (outgoing ?) PCC President by the Congress Leadership.”

7:50 PM: He (Navjot Singh Sidhu) had taken stand against corruption in Punjab…, if his suggestions are not paid heed to, he would not want to be a speechless president. We urge him to withdraw resignation & request high command to redress his grievances:Congress MLA Sukhpal Singh Khaira

7:45 PM: Captain Amarinder Singh said he is closely following the developments and will soon announce a big decision. He further alleged that Navjot Singh Sidhu is “preparing the ground to quit Congress and join another party” ahead of the Punjab Assembly polls.

7:30 PM: Navjot Singh Sidhu’s resignation has not been accepted. Top leadership has asked state leadership to resolve the matter at their own level first: Congress sources

7:15 PM: Soon after Razia Sultana tendered her resignation, Pargat Singh also put in his paper as state minister ‘in Solidarity’ with Sidhu.

06:50 PM: Razia Sultana, who took as a Cabinet Minister of Punjab two days ago, resigns “in solidarity with Navjot Singh Sidhu”, who stepped down as Punjab Congress president earlier today She says, “Sidhu Sahab is a man of principles. He is fighting for Punjab and Punjabiyat.”

6:07 PM: Congress is getting destroyed in its own maze of tricks. Its policies and leadership are filled with negativity, effect of which can be seen: Union Minister Mukhtar Abbas Naqvi on political situation in Punjab following the resignation of Punjab Congress chief Navjot Singh Sidhu

5:57 PM: As per reports, Punjab CM Charanjit Singh Channi is headed to Patiala to meet Navjot Singh Sidhu. The meeting could take place at around 7.30 pm today.

5: 27 PM: Because of the ongoing political crisis in Punjab, Chief Minister Charanjit Channi has called an emergency meeting with all his cabinet colleagues. The Chief Minister’s meeting with his fellow ministers will begin shortly.

4:45 PM: Treasurer of the Punjab Congress Committee Gulzar Inder Chahal has quit after Navjot Singh Sidhu’s resignation as party chief in the state. Chahal is a close aide of Sidhu.

4:35 PM: It will be settled if he is upset…though he is not upset with me…: Punjab CM Charanjit Sigh Channi on Navjot Singh Sidhu being upset over bureaucratic setup and his commands not being followed after cabinet expansion in Punjab.

4:28 PM: “This shows that Navjot Singh Sidhu is against Dalits. One poor son was made the chief minister… this, Sidhu could not bear. It is very sad,” AAP spokesperson Saurabh Bhardwaj told reporters.

4:22 PM:  The Aam Aadmi Party claimed that Punjab Congress president Navjot Singh Sidhu quit from his post as he ‘could not bear” that a Dalit has been made the chief minister of the state.

4:05PM: I have no information: Punjab Chief Minister Charanjit Singh Channi on being asked about Navjot Singh Sidhu’s resignation as Punjab Congress chief

3:54 PM: The surprise step from Sidhu comes at a time new Chief Minister Charanjit Singh Channi, seen to be close to Navjot Sidhu, had been making changes to the Punjab cabinet.

3:50 PM: Sidhu’s resignation is the latest update in a series of dramatic developments in Punjab over the last few weeks.

It must be noted that Sidhu was appointed as the Punjab Pradesh Congress Committee chief earlier in July amid rift within the Punjab Congress. Apart from Sidhu, Congress had also appointed four working presidents for the Punjab unit — Sangat Singh Gilzian, Sukhwinder Singh Danny, Pawan Goel and Kuljit Singh Nagra.

In the resignation letter, he said he cannot compromise on the future of Punjab, however, he did not explain about the “compromise” part mentioned in the letter.

Media reports claim that Sidhu was disappointed as he wasn’t named the chief minister after Amarinder Singh. The reports also claimed that he did not meet Sonia Gandhi or top Congress leadership before taking the decision to quit the post.

The internal rift between Singh and Sidhu started in 2019 and escalated this year and the decision to elevate Sidhu as the chief of the party’s state unit was taken by the Congress high command in a bid to end infighting ahead of the assembly elections next year.