Mohammed Anees' house was one among 35 houses torched in Khajuri Khas area on Tuesday. A team of BSF officials, led by a DIG, visited him today and announced that it would provide financial assistance to the family and repair the house as well.

New Delhi: The Border Security Force (BSF) on Saturday announced that it would provide financial assistance to the family of Mohammed Anees, its trooper whose house was torched during communal violence in northeast Delhi earlier this week, also promising to repair the house. Also Read - Amid Delhi Violence, Amit Shah Offers Prayers at Puri's Shree Jagannath Temple Along With 3 Union Ministers

The house, which was attacked on February 25, was among 35 houses torched by rioters in Khajoori Khas. It was not spared despite having a nameplate stating that it was the house of a BSF jawan. Also Read - Delhi Violence: All 69 People Who Filed ex-Gratia For Damage Will Receive Amount Tomorrow, Says Kejriwal | Highlights

A team of BSF officials, led by Deputy Inspector General (DIG) Pushpendra Rathore visited the jawan’s family today. Speaking to media, DIG Rathore said, “BSF engineers have come with us. They will repair the house of constable Mohammad Anees. BSF will provide financial assistance to the family from its welfare fund.” Also Read - Delhi Violence: 'What Will we Eat if we Don't Earn', Hungry For Three Days, 60-Year-old Rag Picker Killed Despite Police's Claims of Peace

“He is currently posted in Odisha and will soon be transferred to Delhi,” the senior officer further said. 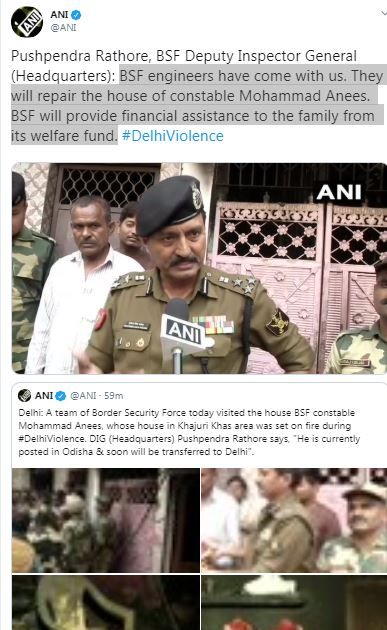 Mohammed Anees, who joined the BSF in 2013, is currently posted in Bhubaneswar. In 2013, he had also served at the tension-ridden India-Pakistan border in Jammu and Kashmir. The BSF team’s visit came after news reports revealed how even a soldier’s house was not spared during the riots.

The family had alleged that during the attack, the rioters had called them ‘Pakistanis,’ declaring that they were there to give the family ‘naagrikta’ (citizenship).

Thus far, 42 people have lost their lives in the violence that began as a clash between pro- and anti-Citizenship Amendment Act (CAA) protesters on Sunday. A day later, however, it turned into communal riots and continued on Tuesday as well.

The situation, however, has been peaceful since Wednesday after National Security Advisor (NSA) Ajit Doval visited the riot-hit areas Tuesday night after being handed the charge to bring the situation under control.