Budget 2017: A breakdown of how government earns and where it spends

There are a total of 52 sectors that the government allocates money to with an aim of development of the sectors.

New Delhi, Jan 30: The most significant and most awaited budget is just round the corner and will be presented on February 1. Finance Minister Arun Jaitley will present his fourth budget for the fiscal year 2017-18 in the Parliament. Last year, the Indian government had presented a budget of Rs 19,78,060 crore to be spent in the economic year 2016-17.Also Read - Modi Government Amends Old Policy On Suspension of Family Pension | All You Need To Know

For this year as well, the government is all set to roll out a planned budget allocation to the various sectors of the Indian economy. However, have you ever thought how does the government earn that money that it allocates to various sectors at the presentation of the budgets? Tax, yes. But tax is just a little part of government’s income. Also Read - Post Office Saving Scheme: Just Invest Rs 10,000 Every Month And Get Return up to Rs 16 Lakh on Maturity

There are basically three sources of the government’s income that goes directly in its pocket and a lot is covered in these three:

Now, of these, corporation tax and income tax which comes under ‘Taxes’ category makes one-third of the government’s total earning. 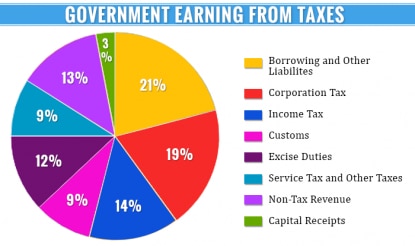 Where does the government spend the tax money?

Where does the government spend the money collected from various sources?

Every year during the budget presentation session, the government allocates some amount of money for the desired development of that particular sector. Last year, Finance Minister Arun Jaitley proposed a budget of Rs 19,78,060 crore in the fiscal year 2016-17, which was 10.8% higher than Rs 17,65,436 crore which was presented for the fiscal year 2015-16. 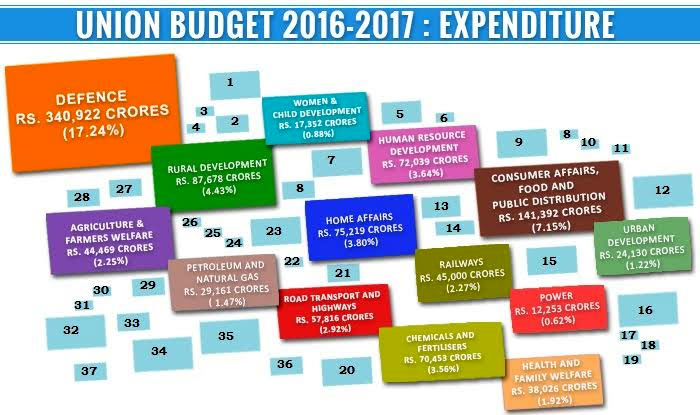 The budget allocation for the financial year 2016-17 for the rest of the sectors:

There are a total of 52 sectors that the government allocates money to with an aim of development of the sectors.