‘Can’t Let Another 1984-Like Situation in Country,’ Says Delhi High Court on Violence

Taking up the plea, Justice S Muralidhar called the situation 'very unpleasant' and called the killing of an IB officer in the clashes 'unfortunate.' It also said that the time had come to show that Z-category security is for everyone.

New Delhi: The Delhi High Court on Wednesday observed that ‘another 1984-like situation’ can’t be allowed in the national capital as it took up a plea seeking FIRs in connection with the deadly communal clash that broke out in northwest Delhi on Monday and continued on Tuesday, after initially starting as a clash between pro-and anti-Citizenship Amendment Act (CAA) groups. Also Read - Delhi Violence: Intelligence Bureau Officer Found Dead in Chand Bagh 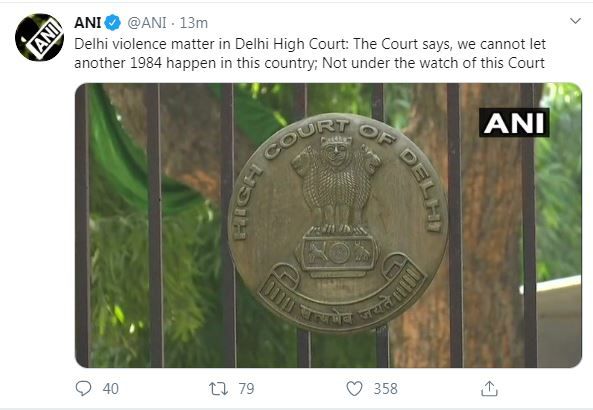 Taking up the plea, Justice S Muralidhar called the situation ‘very unpleasant’ and remarked that the highest functionaries of the state should be on ‘high alert.’ Calling the killing of an Intelligence Bureau (IB) officer during the clashes ‘unfortunate,’ the court said that the time has come to show that the Z-category security is for everyone.’ Also Read - 'Those Who Never Considered Burhan Wani And Afzal Guru Terrorists...' Kapil Mishra on Delhi Violence

The court called upon Chief Minister Arvind Kejriwal and Deputy Chief Minister Manish Sisodia to go and meet the injured and asked the police to explore the possibility to set up a dedicated helpline number. It further directed the police to ensure a safe passage to patients, families and last riots of the deceased. It also directed that rehabilitation centres for those affected by the violence.

It appointed advocate Zubeda Begum as amicus curiae to ensure compliance of its orders. The matter will now be heard on Friday.

The death toll in the ongoing communal violence reached 21, with more than 180 persons injured.