In what appears to be an alleged suicide attempt, the businessman wrote a letter to his company and family members expressing his anguish over his failure as an entrepreneur.

New Delhi: Hours after search operations were launched to locate VG Siddhartha, the founder of India’s largest coffee chain Cafe Coffee Day (CCD), a letter was recovered that was addressed to his company and family saying, “I am very sorry to let down all the people that put their trust in me.”Also Read - PSI Recruitment Scam: Candidates Write Letter in Blood to PM Modi, Threaten to Join Terror Group if Denied Justice

In what could be a suicide attempt, the businessman, who is also the son-in-law of former Karnataka Chief Minister SM Krishna, in his letter to the Board of Directors and to his CCD family, expressed his anguish over failure to “create the right profitable business model” despite his “best efforts”. Also Read - On Camera: Woman Lawyer Kicked, Punched on Road by Neighbour in Karnataka's Bagalkote

The details of the FIR filed by the driver said that he was driving an Innova since morning when they left Siddhartha’s Bangalore residence. They were headed home by noon when he asked the driver to take a detour towards Sakleshpur and then to Mangaluru. Also Read - Bengaluru: List of Areas To Face Electricity Disruption From Today to May 15

Once they reached Mangaluru, the coffee chain founder asked the driver to halt at a bridge and wait on the other side of it. However, until 8 PM, Siddhartha did not return and could not be traced even on call.

Panic-struck, the driver searched for him around the area but could not spot him anywhere. He then alerted Siddhartha’s family who informed the police. A massive search was launched by the Dakshina Kannada police to trace the businessman.

Popularly referred as the Coffee King of India, Siddhartha had been facing trouble with the tax department and had run into losses of Rs 7,000 crore, reports said.

Siddhartha was recently making the headlines for selling his stake in Mindtree to L&T which then mounted the first hostile takeover in Indian IT industry. Moreover, he was also in the news for being in talks with Coca-Cola to sell Café Coffee Day. 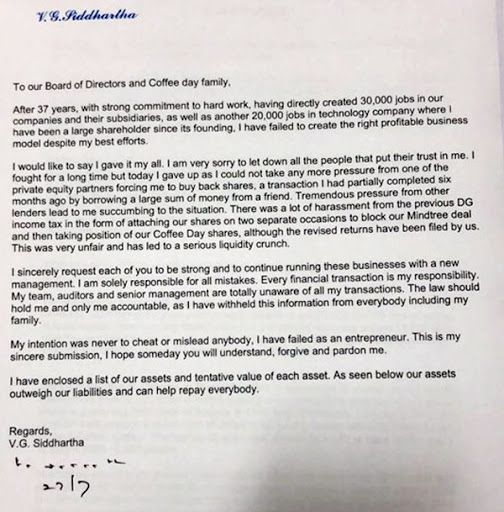 “After 37 years, with strong commitment to hark work, having directly created 30,000 jobs in our companies and their subsidiaries, as well as another 20,000 jobs in technology company where I have been a large shareholder since its founding, I have failed to create the right profitable business model despite my best efforts.

I would like to say I gave it my all. I am very sorry to let down all the people that put their trust in me. I fought for a long time but today I gave up as I could not take any more pressure from one of the private equity partners forcing me to buy back shares, a transaction, I had partially completed six months ago by borrowing a large sum of money from a friend. There was a lot of harassment from the previous DG income tax attaching our shares on two separate occasions to block our Mindtree deal and then taking position of our Cafe Coffee Day shares, although the revised returns have been filed by us. This is very unfair and has led to serious liquidity crunch.

I sincerely request each of you to be strong and to continue running these businesses with a new management. I am solely responsible for all mistakes. Every financial transaction is my responsibility. My team, auditors and senior management are totally unaware of all my transactions. The law should hold me and only me accountable, as I have withheld this information from everybody including my family.

My intention was never to cheat anybody. I have failed as an entrepreneur. This is my sincere submission, I hope someday you will understand, forgive and pardon me.

I have enclosed a list of our assets and tentative value of each asset. As seen below our assets outweigh our liabilities and help repay everybody.”