Centre Extends Ban on LTTE For Its ‘Anti-India Posture’

The Home ministry added that LTTE had been clandestinely working towards Tamil Eelam, a proposed independent state for Tamils, and undertaking fundraising activities for the same.

New Delhi: The Union Home Ministry has issued a fresh notification extending the ban on the Liberation Tigers of Tamil Eelam (LTTE) over its strong anti-India posture and the threat it poses to the nation. (Also read: ‘No Link to Rajiv Gandhi Assassination,’ Claims LTTE)

The ministry added that LTTE had been clandestinely working towards Tamil Eelam, a proposed independent state for Tamils, and undertaking fundraising activities for the same. 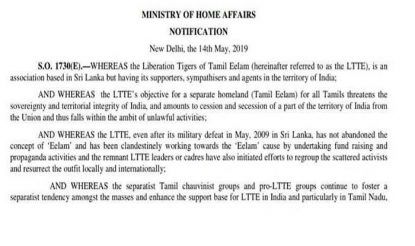 Part of the MHA notification

The notification has pointed out that “the activities of the LTTE remnant cadres, dropouts, sympathisers, supporters who have been traced out recently in the State of Tamil Nadu suggest that the cadres sent to Tamil Nadu would ultimately be utilised by the LTTE for unlawful activities.

It said that despite the ban, many pro-LTTE ‘forces’ were trying to extend support to the outfit. “LTTE leaders, operatives and supporters have been inimically opposed to India’s policy on their organisation and action of the State machinery in curbing their activities,” it added.

“…the LTTE continues to adopt a strong anti-India posture as also continues to pose a grave threat to the security of Indian nationals, it is necessary to declare LTTE as an unlawful association with immediate effect,” it said.

It added that the Central Government felt that the “activities of the LTTE continue to pose a threat to, and are detrimental to, the sovereignty and territorial integrity of India as also to the public order, and, therefore, it should be declared as an unlawful association”.

As many as 41 terrorist outfits have been banned under the first schedule of the unlawful activities (Prevention) Act, 1967. LTTE has been declared a terrorist organisation by as many as 32 countries, including the European Union.