If numbers are anything to go by, the 20th edition of the Delhi Book Fair is witnessing a dramatic comeback of the iconic Indian comic character, Chacha Chaudhary, whose creator Pran Kumar Sharma died recently. 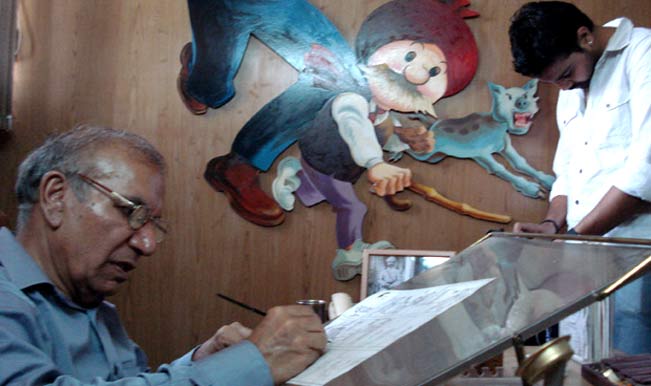 New Delhi, Aug 27:  If numbers are anything to go by, the 20th edition of the Delhi Book Fair is witnessing a dramatic comeback of the iconic Indian comic character, Chacha Chaudhary, whose creator Pran Kumar Sharma died recently. “Our stall has seen an unprecedented footfall over the last few days and we have already sold more than three thousand copies of the Chacha Chaudhary series,” Gulshan Rai, publisher, Diamond Comics, told PTI. Also Read - Chacha Chaudhary To Release on OTT Platform Soon

In what could be called a fitting tribute, Diamond Comics has also republished all the early editions of the series and released them at their original price, effectively leading to a huge discount. People visiting the fair could be seen lapping up the opportunity to purchase these comic books, with the Diamond Comics stall swarming with buyers cutting across the age spectrum, giving credence to the publisher’s claim. Also Read - ECB Terminates Players' Contracts For The Hundred

“I remember fighting with my siblings over who would read the comic first. Such was the craze that even during exams, I used to keep those comics underneath my textbooks, all the while pretending that I was studying,” said Rachita Arora, a homemaker, taking a trip down memory lane at the Fair. The diminutive ‘Chacha’, with “a brain sharper than a needle and faster than a super-computer”, once had a ubiquitous presence in many Indian homes.

“But like other indigenous comic characters, ‘Chacha’ too faded away from public memory owing to multiple distractions,” Rachita added. Shivani Gupta, an avowed fan of the endearing character, said, “My son remains glued to the television watching shows like ‘Chhota Bheem’ when he is not busy fiddling with an app or the other on the phone. I am buying a few copies of Chacha Chaudhury, just to inculcate the habit of reading in him.”

Meanwhile, Chacha Chaudhary fans might be able to possess some collectors’ items through a deal announced by the online shopping site Groupon India. The site in collaboration with Diamond Comics has launched a series of deals, which offer limited edition copies of the comics bearing digital autographs of Pran. The package contains other Chacha merchandise like DVDs, 3D comics and magnet stickers.

Four deals available with the site including “The Best of Chacha Chaudhury” (English) a handpicked collection of five popular issues of the comics priced at Rs 333. Buyers would also receive a DVD worth Rs 150, a Chacha Chaudhary magnet sticker, and a 3D comic worth Rs 50 on purchase of the deal. Pran imagined Chacha a middle class frail but highly intelligent old man. He always sported a bushy bristling white mustache and a trademark red pagadi. A wooden stick, a pocket watch and a waistcoat with a double inside pocket are also some of Chacha’s wardrobe staples.

Wife Bini (Chachi), a faithful street dog Rocket and a giant called Sabu who is his sidekick are what Pran gave Chacha as his household members. The Chacha Chaudhary comic is available in 10 languages.