Delhi Police PRO MS Randhawa said that on February 24, after receiving information that Hussain was 'trapped' and 'surrounded,' police checked and found him at his home.

New Delhi: The Delhi Police on Tuesday clarified that it didn’t ‘rescue’ absconding Aam Aadmi Party (AAP) councillor, Tahir Hussain, as it found him at his home on going to check after receiving information that he was ‘trapped’ and ‘surrounded’ by a mob. Also Read - Delhi Violence: SC Lawyer Files FIR For Immediate Arrest of Tahir Hussain; Death Toll Touches 42 | Highlights

The clarification came after reports emerged in the media that Hussain, who was suspended by his party after he was accused of killing Intelligence Bureau (IB) staffer Ankit Sharma during the riots, was, in fact, innocent as he himself had to be rescued by the Delhi Police. Also Read - Delhi Violence: Death Toll Reaches 38, Over 500 Held For Questioning, AAP Suspends Tahir Hussain | Top 10 Points

Speaking to news agency ANI, Delhi Police PRO MS Randhawa said, “There are some media reports that Tahir Hussain was rescued by police. The fact is that on 24 February night, we received information that a councillor is trapped and surrounded but when police checked he was found at his home.” Also Read - Delhi Violence: AAP Suspends Tahir Hussain After Police Book Him For Murder of IB Staffer 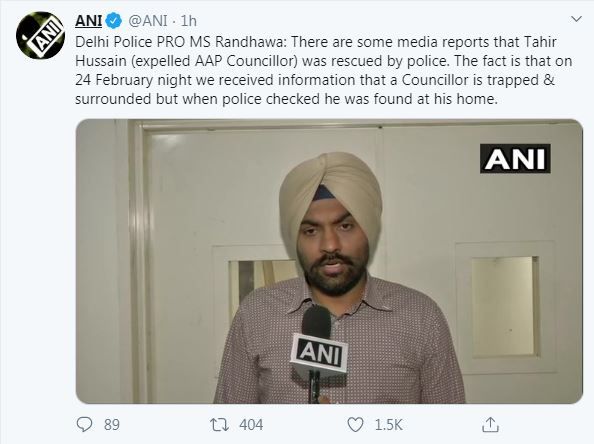 “On 26th February, when Ankit Sharma’s body was found and his family made allegations, Tahir became the main accused. After that, his house was searched and evidence was gathered. Police are conducting raids and trying to arrest him as soon as possible,” the officer added.

Notably, Hussain has been on the run since February 27, when a First Information Report (FIR) was registered against him for the IB staffer’s murder.

In the days to come, more gruesome details of Ankit Sharma’s murder have emerged, but the police is yet to nab the suspended AAP councillor.

On a related note, the police earlier today arrested Mohammed Shahrukh, the man who was caught on camera pointing a gun at a Delhi Police personnel on February 24 at Jaffrabad. He was arrested from Shamli in Uttar Pradesh. The police is also probing if he has any possible links with Hussain.

He was later sent to four-day police custody.