As Prime Minister Narendra Modi aptly pointed out, “fetching of over Rs 2 lakh crore from auction of just 33 coal blocks has shown that policy-driven governance can rid the system of corruption. 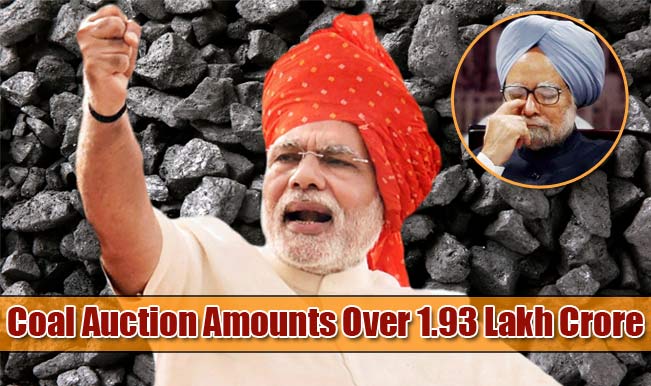 India has hit a gold mine with the recently concluded auction of 29 coal mines in two phases. The public exchequer continues to swell on revenue from coal block auctions. The total proceeds from the coal mines auctions have crossed Rs 1.93 lakh crore; surpassing CAG’s estimate of Rs.1.86 lakh crore losses on account of allocation of 206 captive coal blocks without auction since 1993. It is estimated that an additional tariff benefit of around Rs 69,300 crore will accrue to the power consumers through the reverse auction of coal blocks.Also Read - India Soon Going To Launch 75 Satellites To Space Made By Students: PM Modi at UNGA

Moreover greater revenue flows to states from the auctions dovetails with the government’s plans to develop the coal-rich eastern region. It is estimated that Rs 3.35 lakh crore of likely revenue to States through coal mines e-auctions & allotments. Jharkhand and Chhattisgarh are likely to receive a total of nearly Rs 1.10 lakh crore each, including royalty over 30 years from just the second phase of auction. Also Read - Some Countries Use Terrorism as Political Tool: PM Modi Takes Dig at Pakistan in His UNGA Address

The sale of mines belonging to two categories, those already producing (19) and those ready-to-produce (14), which started on February 14 ended on 9th March.  The transparency in the auctions has paid rich dividends. Producing blocks saw higher bids than the ready to produce assets. The two rounds of auction would see power rates coming down by Rs 69,300 crore. These rate cuts will be offered by companies bagging coal blocks reserved for the power sector. The lower cost of power would benefit coal bearing states such as Odisha, West Bengal, Jharkhand, Chhattisgarh, Madhya Pradesh and Maharashtra. Also Read - Afghanistan's Territory Should Not Be Used To Spread Terrorism, Says PM Modi at UNGA | Highlights

Prime Minister Narendra Modi had said earlier this month that CAG’s Rs.1.86 lakh crore loss figure in coal block allocation has raised some doubts initially. But the auction of less than ten per cent of those mines, that is, 19 mines in the first tranche alone garnered around Rs 1.10 lakh crore.

In the UPA government, the allocations were made by a screening committee set up by the government. Arbitrary and discretionary allocations based on the political connections and financial clout of aspiring companies and individuals were the norm, rather than a rational and economic logic and genuine needs of companies. In other words, there was no well laid down procedure which is objective & transparent system for allocation of coal mines allotment.

Amendments in the Coal Mines Act though initiated in 2005 were not pursued to its logical end. As a result of this, no fresh coal block allocation could be made during last 4/5 years (2008 onwards). Though milestones were set up for the operation of allocated coal blocks but because of liberal monitoring and repeated extensions given, a very few blocks came in the production.

In a severe indictment of earlier UPA government, the CAG had in 2012 argued that due to the allocation of coal blocks to private firms , the exchequer had lost Rs 1.86 lakh crore on account of improper allocation of coal mines over the years, triggering a nation-wide uproar.

The matter went to the Supreme Court and in its order dated 24.9.2014 cancelled the allotment of 204 coal mines and held allocation of coal blocks made through the Screening Committee rout and Government dispensation route as arbitrary and illegal.

In order to laid down robust & transparent system after Supreme Court order, an Ordinance was promulgated to legally enable the Government to re-allocate 204 coal mines cancelled the court  and ensure smooth transfer of right, title and interests in the mine along with its land and other associated mining infrastructure to the new allocatee to be selected through an auction or allotment to Government companies, as the case may be.

The Parliament has passed the Coal Mines (Special Provisions) Bill 2015 on 20th March, 2015. The Bill will replace Ordinance issued by the Government, the first as on 21st October, 2014 and then repromulgated on 26th December, 2014, after the apex court cancelled the allocation of 204 blocks.

The objectives and salient features of the Coal Mines (Special Provisions) Bill, 2015 are as follows :

Objectives of the Bill:

To provide for allocation of coal mines and vesting of the right, title and interest in and over the land and mine infrastructure to successful bidders and allottees with a view to ensure continuity in coal mining operations and production of coal.

To take immediate action to auction or allot coal mines to minimise impact on core sectors such as steel, cement and power, which are vital for the development of the nation.

To amend the Coal Mines (Nationalization) Act, 1973 and the Mines and Minerals (Development and Regulation) Act, 1957 thereby removing the restriction of end use from the eligibility to undertake coal mining except in the case of certain specified coal blocks.

Salient features of the Bill:

1. 204 cancelled blocks have been defined as ‘Schedule-I coal mines’.

2. 42 producing and ready to produce coal mine out of Schedule-I coal mines are defined as ‘Schedule-II coal mines’.

3. Other 32 substantially developed coal blocks out of Schedule-I coal mines are defined as ‘Schedule-III coal mines’ meant for specified end-use(more mines can be added to Schedule-III).

4. The Central Government has the power to classify mines identified from Schedule I coal mines as earmarked for a class of specified end-uses.

5. Allocation shall be made through auction to a company or their JV.

6. In case of Government Company or their JV, allotment may be made without auction.

7. There shall be no end use restrictions on the eligibility to participate in the auction, other than for Schedule II & III coal mines.

8. ‘Nominated Authority’ shall be appointed for conduct of auction/ allotment and vesting and transfer of all interests, rights and titles of these coal mines in the successful bidder or allottee. Nominated Authority to be assisted by experts and other officers.

9. The proceeds of auction shall be received by the Nominated Authority and disbursed to respective States.

10. Compensation only for land and immovable mining infrastructure shall be paid to the prior allottee after paying secured creditors.

11. The quantum of compensation for the mine infrastructure in relation to Schedule I coal mines is determined as per the written down value reflected in the statutorily audited balance sheet of the previous financial year.

12. The quantum of compensation for the land in relation to Schedule I coal mines shall be as per the registered sale deeds together with twelve per cent. simple interest from the date of such purchase or acquisition, till the date of the execution of the vesting order or the allotment order, as the case may be.

13. ‘Commissioner of Payments’ shall be appointed for disbursal of compensation.

14. The Central Government may appoint Custodian(s) for operation and management of the coal mines till they are allocated through auction or allotment.

As per provisions of the Ordinance and Rules framed , the auction of coal blocks was decided to be carried out in e-auction mode in order to keep the process transparent.  110 coal blocks were earmarked with specific end-use for auction and allotment. The process of e- auction commenced with the publication of Notice Inviting Tenders (NIT) on 25-12-2014 for 23 running coal mines appearing in Schedule II. Out of these 23 coal mine/blocks, e-auction of 19 coal mineshas been successfully completed in the first tranche. In the second tranche, e- auction of another 23 coal blocks from Schedule III have been put for auction with the publication of Notice Inviting Tenders (NIT) on 07-01-2015. Out of these, e-auction of 14 coal blocks in 13 packages has been completed as on 8-03-2015. The total estimated amount of revenue likely to be raised in respect of 29 coal mines already auctioned is Rs.1.93 lakh crore. The auction proceeds shall be transferred to the respective state governments.  Eastern states would be the biggest beneficiary and would financially empower them.

There were apprehensions about the likely response of the bidders to the new system but it is now clear that they are enthusiastic about it. For companies that need an important resource like coal , the best option is securing it through a clean & legal procedure. The auction saw very competitive and robust bidding by companies which were ready to pay high prices to ensure fuel security.

The government also allotted 38 mines to central and state public sector units including NTPC, DVC and SAIL. Among these are power generating companies of West Bengal, Chattisgarh, Jharkhand, Maharastra , Odisha, Uttar Pradesh, Rajasthan, Bihar, Punjab, Gujarat and Telangana. All the mines allotted are for the power sector except Sitanala mine given to SAIL. It is estimated that Rs1.41 lakh crore of likely revenue to States from royalty over 30 years from these 38 coal mines allotments.

As Prime Minister Narendra Modi aptly pointed out, “fetching of over Rs 2 lakh crore from auction of just 33 coal blocks has shown that policy-driven governance can rid the system of corruption. If we run the country based on policies, if we run it efficiently, the system can be rid of corruption. We can develop graft-free system. We have taken this burden and are going ahead in that direction.”