Comedian Hasan Minhaj on ‘Homecoming King’ and the Power of Storytelling

[Photo Credit: Rebecca Adler Rotenberg]Also Read - Hasan Minhaj's Father Roasting Him Because of Shah Rukh Khan is All Asian Dads Ever And THIS Viral Tweet is Proof!

Within the first few opening moments of his new Off-Broadway show, “Homecoming King,” Hasan Minhaj’s stage presence looms large. His boisterous voice fills an auditorium of two hundred, and Minhaj takes the viewer on a journey through many hilarious and awkward and painful experiences that have shaped who he is. Also Read - Aziz Ansari opens up about accusation of sexual misconduct

Minhaj launched into the spotlight in the fall of 2014 when he became the newest correspondent on “The Daily Show,” but he’s been doing comedy and stand-up for a lot longer than that—even though he didn’t always know growing up that he wanted to do comedy. Also Read - We have always needed funny philosophers: 'Patriot Act' star Hasan Minhaj

“In college, a friend of mine showed me Chris Rock’s ‘Never Scared,’ and it just blew my mind,” Minhaj recalled the about the moment he fell in love with stand-up. Having done speech and debate in high school, he realized that standup was a no holds barred version. “It was one of the most innovative, creative things and forms of artistic expression I had ever seen. I was just blown away by the way Chris rock could talk about politics, relationships, war, gender roles, and all of these things and the whole audience was just entranced. I was like, ‘standup comedy: I gotta do that.’”

Minhaj’s parents, however, were not supportive of his career choice—and, he admits, they shouldn’t have been. But surely, over time, they warmed up to the idea.

“I would say now they’re proud ashamed,” Minhaj explained. “They’re proud when good things happen, and then they get ashamed sometimes when I have to tell stupid jokes or sometimes use crass language on stage, which is completely understandable.”

Minhaj’s parents, who will be there on closing night of “Homecoming King” on November 15, are also his greatest inspirations—his mom because of her love and support, and his dad because Minhaj believes that’s where he got his ability to stand on stage and speak in front of people.

Minhaj’s comedic style is incredibly unique—he draws upon his own experiences with an innovative lense that combines maturity and humor. It is this style that has formed the backbone of “Homecoming King”—and Minhaj fully acknowledges and owns that his heritage has completely informed who he is as a person. “The dual narrative of being this Indian Muslim kid who speaks Urdu with his parents at home and also being this guy who’s obsessed with Jordans and just being an American kid. I felt like that narrative hadn’t existed for a long time in an authentic, uncompromising way where it doesn’t feel like a dual identity—it’s captured as one form.”

The success of his style of storytelling has made “Homecoming King,” and its live theater format, Minhaj’s favorite medium of performance, and what he describes as the most exciting thing he’s done in his career. It also captures Minhaj’s unique stance on the importance and humanity of storytelling. 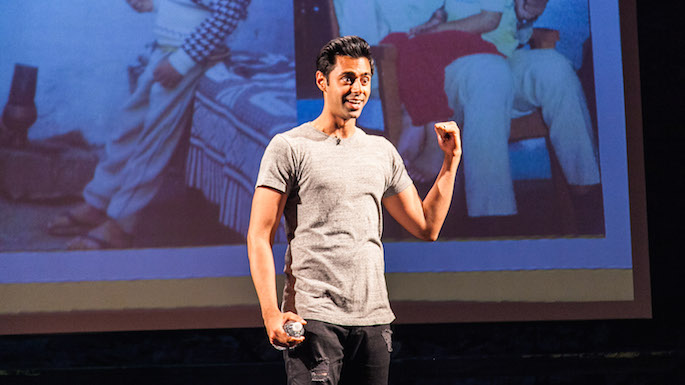 Minhaj hopes the audience is inspired to tell their own stories after hearing his, and the show’s website encourages people to do so using the hashtag #HomecomingKing. According to Minhaj, the title of the show itself bears an inspiring message as well.

The switch from stand-up to live theater hasn’t been difficult for Minhaj, though—besides having to learn to project his voice for a large audience. “I think laughter and sadness are two sides of the same coin,” he explained. “In other words, you can’t have one without the other and if you can tap into one, you can easily tap into the other. So, theater hasn’t been that difficult for me, it’s actually just been really enriching and fun.”

The best part about Minhaj is that despite his recent success, he remains completely down-to-earth. His relatability translates into a strong sense of self, both on and off stage. This is never more clear than when Minhaj describes his greatest accomplishment: pursuing his dreams.

“That’s it—just actually doing it,” Minhaj said. “Thinking about what I wanted to do with my life, saying I want to be a comedian, and then actually going for it and executing that. The greatest gift of my career has been being able to make a living doing it—being able to have healthcare and still do comedy and make people laugh. I’m very grateful for that.”