Containment Zones in Telangana: Over 1,000 COVID-19 Hotspots in State, Hyderabad Tops The List

The state health authorities came out with a complete list of containment zones, for the first time since the outbreak of COVID-19.

Hyderabad: Amid rapid surge in COVID-19 cases, the number of containment zones in Telangana surpassed the 1,000-mark,, with Mahabubnagar and Rangareddy districts topping the list. The state health authorities came out with a complete list of containment zones, for the first time since the outbreak of COVID-19.Also Read - Full Lockdown in Kerala Tomorrow: Malls, Theatres To Remain Shut | Check Guidelines Here

Mahabubnagar district, which reported 161 positive cases in the last seven days, has the highest number of containment zones. Majority of them are in Mahabubnagar town. The district has 194 zones against 92 Greater Hyderabad (one of the hotspots in state). Also Read - GATE 2022: IIT Kharagpur Hints At Postponing Exam, Issues Notification Amid Rising Demand From Students

Rangareddy has 163 containment zones. The district, which reported 1,108 cases in the last one week, has a maximum number of zones in urban pockets like Shamshabad, Moinabad, Meerpet and Jalpally.

Among the zones in GHMC, Charminar zone, which covers a large part of the old city of Hyderabad, has the maximum number of containment zones (33) followed by Secunderabad (23). Khairatabad zone has 14, Serlingampally 10, Kukatpally 9 and LB Nagar 5 zones.

Sangareddy district has 82 zones, most of them in urban areas. Karimnagar and Nizamabad districts, which saw a spike in COVID cases in recent days, have 57 and 12 containment zones respectively. Warangal Urban district, which is also witnessing virus spread, has 28 zones.

Medchal Malkajgiri, another district abutting GHMC and which has been witnessing a spike in cases for the last few weeks, has no containment zone, according to the bulletin. The district saw 554 new infections in the last seven days.

Sangareddy district, which also shares borders with GHMC, has 82 zones, most of them in urban areas. Statistics show 441 people tested positive in this district in the last one week.

Adilabad district has 16, Jagtial has 52, Jogulamba Gadwal has 46, Kamareddy has 15, Khammam  has 18, Mahabubabad has 36 containment zones.

There are no containment zones in Bhadradri Kothagudem, Medchal Malkajgiri, Nagarkurnool, Vikarabad and Yadadri Bhongir districts. 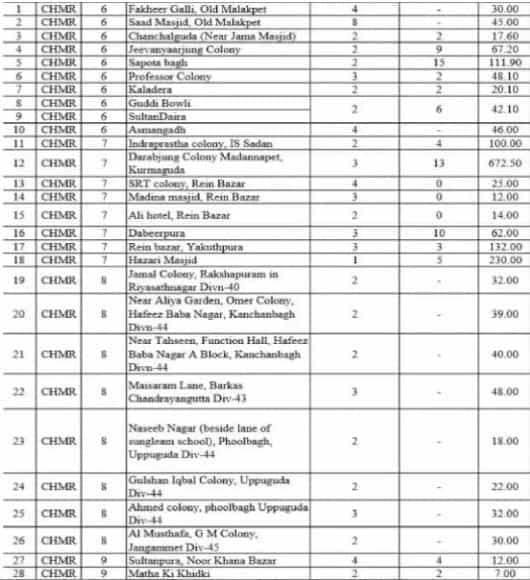