Coronavirus: Delhi Airport at a Greater Risk of Importing nCov Than Other Indian Airports, Claims Study

Delhi airport is more vulnerable to import the virus because it serves as the main entry point, which explains its localised relative import risk of 0.066 per cent. Mumbai's Chhatrapati Shivaji Airport has a risk of 0.034 per cent while Kolkata's Netaji Subhash Chandra Bose Airport has 0.020 per cent.

New Delhi: A study by Germany’s Humboldt University and Robert Koch Institute has revealed that India is among the top 20 countries which are likely to import coronavirus. Delhi Airport is at a greater risk than the other airports. The list of 20 countries includes Thailand, Japan, South Korea, Hong Kong, Taiwan, USA, Vietnam, Malaysia, Singapore, Cambodia, Australia, Indonesia, Macau, the Philippines, Russia, Canada, India, Germany, United Arab Emirates, Myanmar. Also Read - In Wake of Coronavirus Outbreak, India Bars Entry of Foreigners Who Went to China After Jan 15

“By looking at air travel passenger numbers, we can estimate how likely it is the virus spreads to other areas. The busier a flight route, the more probable it is an infected passenger travels this route. Using these probabilistic concepts, we calculate relative import risk to other airports,” the study said. Also Read - Watch | Chinese Nurse Treating Coronavirus Patients Gives Daughter 'Air Hug', Emotional Video Goes Viral 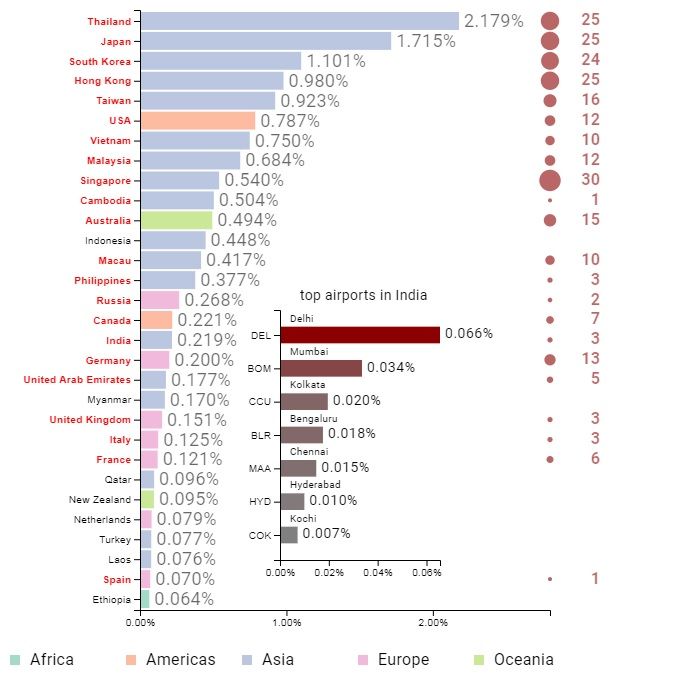 A chart showing the risk factors the countries are facing

The three positive cases reported so far in India are from Kerala. But Delhi airport is more vulnerable to import the virus because it serves as the main entry point, which explains its localised relative import risk of 0.066 per cent. Mumbai’s Chhatrapati Shivaji Airport has a risk of 0.034 per cent while Kolkata’s Netaji Subhash Chandra Bose Airport has 0.020 per cent. Also Read - Coronavirus Outbreak: With Total 803 Deaths, Global Toll Surpasses 2003 SARS Epidemic

In a bid to keep Indians safe from the outbreak of novel coronavirus, which has killed more than 800 people in China, Directorate General of Civil Aviation (DGCA) has decided to bar entry of foreigners who have been to Beijing on or after January 15, 2020.

The latest figures from the Chinese health officials show that 810 people lost their lives due to the n-CoV epidemic. The death toll has surpassed the number of fatalities caused by the SARS epidemic in 2003. As per the reports of WHO, SARS epidemic had killed 774 people 17 years ago.