New Delhi: So far, only one positive case has been reported from West Bengal, but many bureaucrats have been sent to home quarantine already as the first carrier reportedly roamed around at several places, neglecting the precautionary advice. Meanwhile, Lok Sabha MP Mimi Chakraborty, too, went on a self-quarantine, as she was shooting in the UK. Also Read - CRPF Moves Ailing Man to Chandigarh After Airlifting Him From Rajouri

The first case of West Bengal is an 18-year-old who returned from London. According to reports, he contracted the virus in a party about which Oxford University later alerted him. But after landing in India, he was not identified as a coronavirus positive person. His mother, who is a joint secretary of the government, took him to her office, which is the state secretariat — Nabanna. This administrative building houses many offices and is frequented by too many people. Reports said the carrier, along with his mother, met Alapan Bandyopadhyay, the home secretary. As a result, the home secretary has now been put under home quarantine. His wife, Sonali Chakraborty, who is the vice-chancellor of Calcutta University is also quarantined. Also Read - Mamata Ropes in Abhijit Banerjee on COVID-19 Advisory Panel For West Bengal 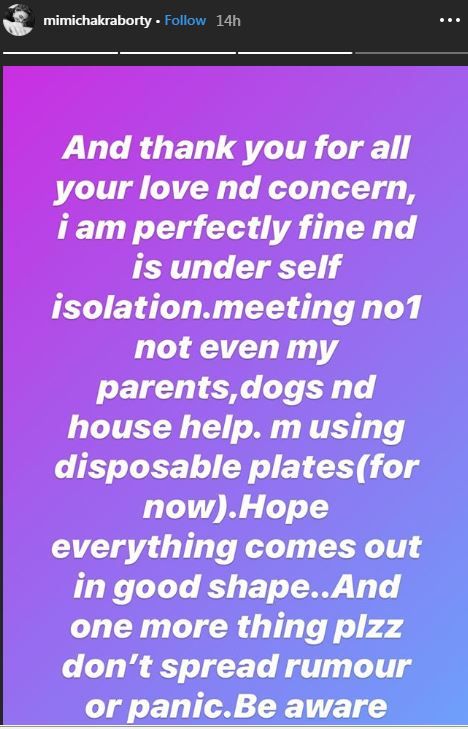 Actor and Lok Sabha MP Mimi Chakraborty is under self-quarantine.

It has been said that everyone with whom the mother-son duo came into contact has been put under quarantine. They took the lift. So the number can be higher than what’s being estimated. Chief Minister Mamata Banerjee was present in her office when the duo came to Nabanna. Also Read - PM Modi Speaks to Bahrain King, Discusses COVID-19 Situation, Financial Markets

A number of actors are coming back from abroad. Social media is up in arms slamming them for not isolating themselves and, instead, attending several events in the city.