The coronavirus (CoV), a large family of viruses that causes illnesses ranging from the common cold to acute respiratory syndromes, is a novel strain not seen before.

The Civil Aviation Ministry has directed seven airports including Delhi, Mumbai, Chennai and Kolkata to make arrangements for the screening of passengers arriving from China in the wake of the outbreak of an infection caused by a new strain of virus there. Also Read - Coronavirus Threat: Deadly Virus Kills 6, Leaves Over 300 Sick in China

Airlines flying in from any airport in China including Hong Kong have been asked to make in-flight announcements requesting passengers with a history of fever and cough and travel to Wuhan city in the past 14 days to self-declare at the port of arrival in order to facilitate early isolation, according to an official statement on Tuesday. Also Read - Health Ministry Issues Travel Advisory For People Visiting China Amid Novel Coronavirus Outbreak

This is in continuation with the travel advisory issued by the Union Health Ministry regarding the threat of novel coronavirus in Wuhan, Hubei province of China asking citizens to follow certain precautionary measures while visiting the country. Also Read - Saudi government to ensure Ebola and Coronavirus free Hajj

As part of an action plan by the Ministry of Civil Aviation (MoCA), airline staff will also guide the passengers in filling up the self-reporting forms, before disembarking, to be checked by staff on arrival.

“The MoCA has directed for all logistics support and arrangements to be made immediately with regard to screening of passengers arriving in India from China including Hong Kong at the identified airports — Chennai, Bengaluru, Hyderabad and Cochin apart from three airports at Delhi, Mumbai and Kolkata identified earlier,” the statement said.

The action-plan includes the thermal screening of passengers to be undertaken, it said. 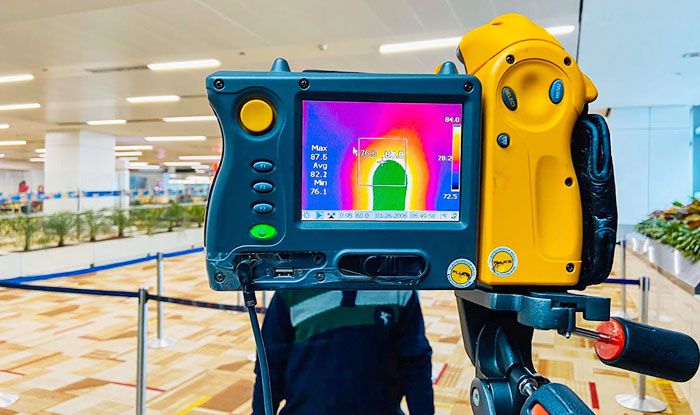 Thermal cameras will be installed at the pre-immigration area of the seven identified airports and airline staff will bring the passengers to the health counters before the immigration check.

The coronavirus (CoV) is a large family of viruses that causes illnesses ranging from the common cold to acute respiratory syndromes, but the virus that has killed four people in China is a novel strain not seen before.

Common symptoms of the novel coronavirus (nCoV) strain, which has infected more than 300 people since the outbreak in Wuhan in December, include respiratory symptoms such as fever, cough, shortness of breath and breathing difficulties, the World Health Organisation (WHO) said.

In more severe cases, the infection can cause pneumonia, severe acute respiratory syndrome, kidney failure, and even death.

Airports have also been asked to display signages at strategic locations of the seven identified airports for screening.

Also, if an ill passenger or crew member is confirmed as a probable case of nCoV, public health authorities should be notified about the contacts using the passenger locator form, the statement said.

The MoCA has called for immediate implementation of the action plan and strict adherence by identified airports and all airlines concerned.

According to the alert issued by the MoCA, all travellers who have visited China, particularly through Wuhan during the past 14 days and show symptoms of acute onset of fever, cough, shortness of breath should report to the airport health unit.

“For other travellers (those without any symptoms), who have visited the affected city and do not have any symptoms on arrival, but develop above-mentioned symptoms within 28 days of arrival in India, should visit nearest hospital facility and report to the state/district health authorities and concerned airport health officer,” the alert read.

Meanwhile, the health ministry has sought from the Ministry of External Affairs details of those who have applied for an Indian visa since December 31 so that they can be counselled.

The MEA has also been requested to disseminate travel advisory to Indian embassies in China and adjoining countries in local languages for wider circulation and passenger information, the health ministry said in a statement.

The Union health secretary has also written to states and Union Territories to review their preparedness, identify gaps and strengthen core capacities in the area of surveillance, laboratory support and in particular, hospital preparedness in terms of isolation and ventilator management of patients with severe respiratory illness.