The magazine said that the Tamil Nadu government may fall in same fashion as the DMK government was dissolved in 1976. It went on to add that the merged AIADMK faction is trying to hide incriminating documents which are with the governor.

New Delhi, Nov 21: The Tamil Nadu government may fall soon as there are serious corruption charges against Chief Minister Edappadi Palaniswami and his deputy O Panneerselvam and 23 other ministers, a report in TTV Dinakaran-backed magazine ‘Namadhu MGR’ claimed. The magazine said that there is a possibility that EPS, OPS and the ministers may go to jail.Also Read - Video: Sasikala Visits Jayalalithaa's Memorial For First Time Since Jail Release

The magazine said that the Tamil Nadu government may fall in same fashion as the DMK government was dissolved in 1976. It went on to add that the merged AIADMK faction is trying to hide incriminating documents which are with the governor. Also Read - Will Set AIADMK Straight, Says Sasikala in Audio Clip After Party Sacks Workers For Talking to Her

The report in the magazine, which is now controlled by VK Sasikala’s nephew TTV Dinakaran, has come at a time when AIADMK Rajya Sabha MP V Maitreyan voiced his discontent. Maitreyan, who is considered to be close to OPS, in a Facebook post, suggested that all is not well within the united AIADMK. Also Read - Tamil Nadu: AIADMK Expels 17 Party Functionaries Who Interacted With Ex-Party Leader VK Sasikala

“Three months since the merger and the fourth month is on. The months pass by but what about hearts?” Maitreyan said in his post without elaborating it further. When Income Tax sleuths carried out raids at late CM J Jayalalithaa’s Poes Garden residence in Chennai last Friday night, Maitreyan was the first AIADMK leader to react. “Whatever be the reason, a raid in Poes Garden where Amma lived gives great pain. As far as I’m concerned, Amma’s home is a temple,” the AIADMK leader had said. 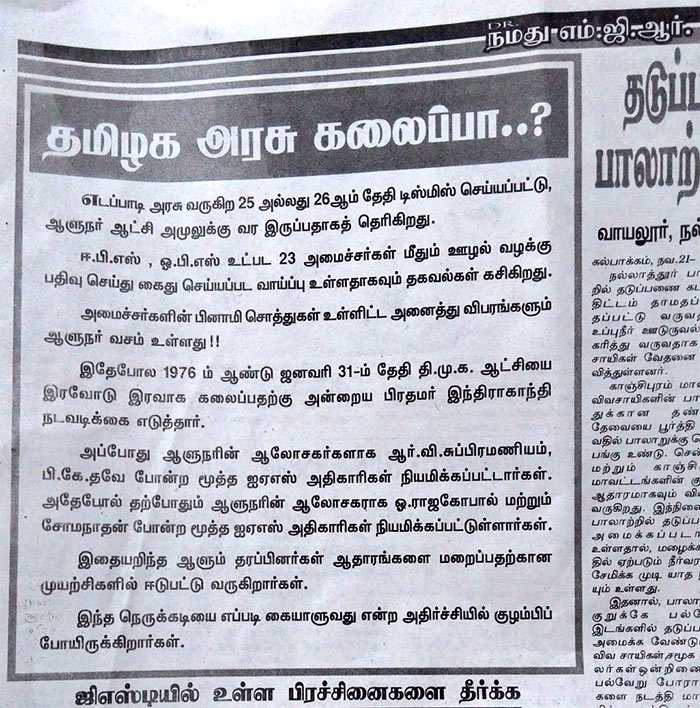 According to sources, Maitreyan and other top leaders of the OPS faction are unhappy over a range of issues. At the time of merger of EPS-OPS camps, it was decided an 11-member steering committee would be formed. However, the committee is yet to be constituted which is said to be one top reasons behind the discontent within the OPS camp. (Also Read: Dinakaran Alleges Modi, Jaitley Trying to Destroy Family After IT Raid)

After fighting it out for nearly six months, the warring EPS-OPS factions of the ruling AIADMK merged on August 21.

The factional feud began in February after Panneerselvam revolted against Sasikala. The former chief minister had said that he was forced to resign from his post and asserted that only a person desired by people and cadres should succeed him in the government and party.  (Also Read: One-Man Commission to Probe Jayalalithaa Death Takes Charge)

Panneerselvam was immediately sacked from the top party post of treasurer, marking the birth of the rebel AIADMK (Puratchi Thalaivi Amma) faction.

Subsequently, Sasikala named Palaniswami as Legislature Party Leader before surrendering at a Bengaluru court to serve a sentence in the disproportionate assets case.

Soon, Palaniswami took over as chief minister. EPS was labelled as Sasikala’s proxy by rebel Panneerselvam and opposition parties led by the DMK.