New Delhi: After facing flak over fast-tracking Covaxin, India’s first indigenous COVID-19 vaccine, the Indian Council of Medical Research (ICMR) asserted that the letter by its Director GeneralDr B

New Delhi: After facing flak over fast-tracking Covaxin, India’s first indigenous COVID-19 vaccine, the Indian Council of Medical Research (ICMR) asserted that the letter by its Director GeneralDr Balram Bhargava to principal investigators of the clinical trial sites was meant to ‘cut unnecessary red tape without bypassing any necessary process, and speed up recruitment of participants’. Earlier on July 2, Bhargava had written to principal investigators of select medical institutions and hospitals to fast-track human clinical trial approvals for the vaccine candidate ‘Covaxin’ being developed in collaboration with Bharat Biotech.Also Read - Kerala Imposes Triple Lockdown in 31 Municipalities in Kozhikode District For Next 1 Week | Details Here

“Just as red tape was not allowed to become a hindrance in the fast track approval of new indigenous testing kits or for introducing in the Indian market potential COVID-19 related drugs, the indigenous vaccine development process has also been sought to be insulated from slow file movement,” the medical body said in a statement issued on Saturday evening. It underlined that all other vaccine candidates across the globe have been similarly fast-tracked and the Drugs Controller General of India has accorded permission to conduct phase 1 and 2 (human) clinical trial of ‘Covaxin’ based on in-depth scrutiny of the available data from pre-clinical studies. Also Read - US Announces $25 Million Aid To Support India's COVID Vaccination Process

Defending its move, the ICMR said that the aim is to complete these phases at the earliest, so that population-based trials for efficacy could be initiated without delay. “Faced with the unprecedented nature of the COVID-19 pandemic, and the consequent dislocation of the normal life, all other vaccine candidates across the globe have been similarly fast-tracked. ICMR’s process is exactly in accordance with the globally accepted norms to fast-track the vaccine development for diseases of pandemic potential wherein human and animal trials can continue in parallel,” it said. Also Read - Two-Third of Population Surveyed in 11 States Have Coronavirus Antibodies, Says ICMR Serosurvey 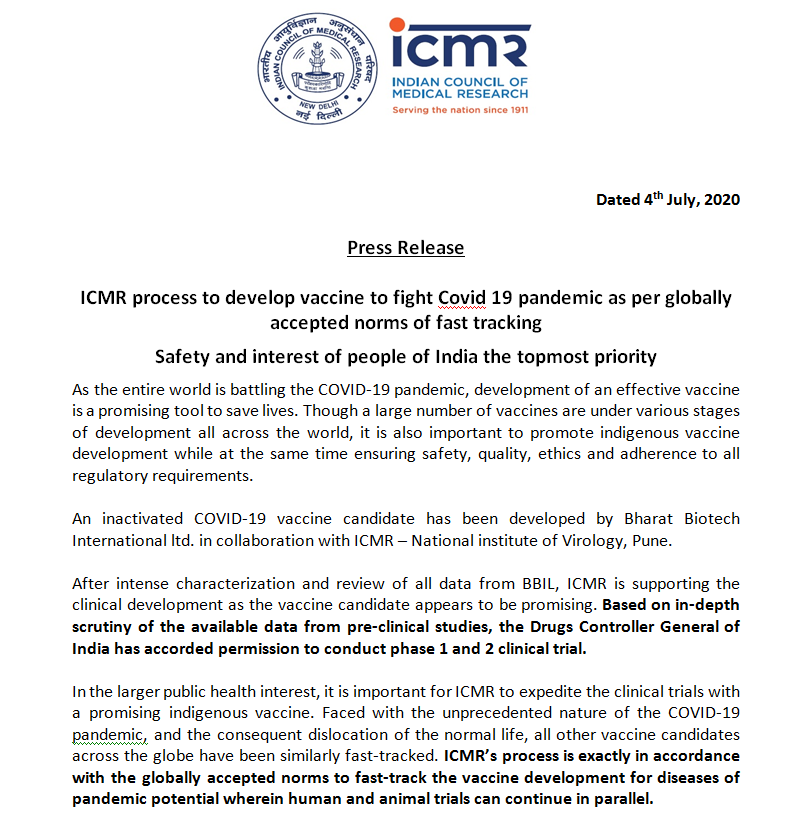 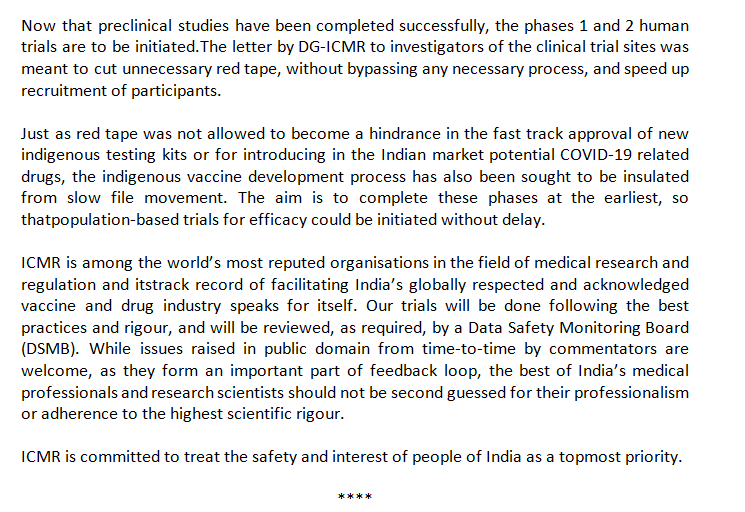 Several health experts including AIIMS director Randeep Guleria and political parties have raised questions on the launch date proposed in the letter by Bhargava. Speaking to a leading portal Guleria said that it is unrealistic and even the ICMR knows that. He claimed that the letter was written to speed up processes.

NK Ganguly, former director general of Indian Council of Medical Research (ICMR), on the other hand said that a good vaccine usually takes at least 18 months. Elaborating on the lengthy process involved in vaccine development, he insisted that after spending many months and infusing a lot of funds, the uncertainty continues to linger. “It may be difficult to say whether the vaccine is successful or not”, he added.

Congress leader Prithviraj Chavan alleged that the ICMR’s plans to launch a coronavirus vaccine by August 15 was aimed only at enabling the Prime Minister to make a big announcement from the Red Fort.

Echoing similar remarks, Communist Party of India (Marxist) general secretary Sitaram Yechury also stated that the medical body was trying to rush the vaccine so that PM Modi could make the announcement on 73rd Independence Day.