Cyclone Fani: Eight Killed in Odisha; Commercial Flight Operations to Resume on May 4

As per the Joint Typhoon Warning Centre, Cyclone Fani is listed to be the most severe storm since the super cyclone of 1999 that killed nearly 10,000 people and devastated swathes of Odisha.

New Delhi: Eight people have reportedly been killed as ‘extremely severe’ cyclone Fani made landfall on eastern coast of Odisha on Friday morning. The government has so far, evacuated nearly 12 lakh people. Besides, the Indian Coast Guard had positioned 34 disaster relief teams at different spots and also deployed four ships, to deal with any kind of exigency.

Catch all the Live updates here:

#WATCH: Visuals of heavy rainfall and strong winds from Balipatna in Khurda after #CycloneFani made a landfall in Odisha’s Puri. pic.twitter.com/g9gXHbpqu5 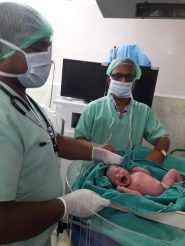 Odisha: Food being distributed at cyclone shelter set up at Sea Aquarium, in Paradip. #CycloneFani pic.twitter.com/I9DL5TM6BU 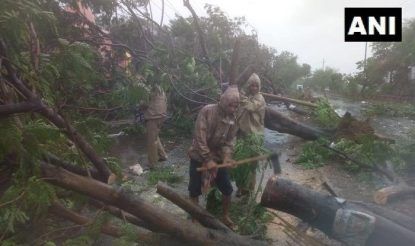 For safety of air passengers from/ to @aaibpiairport & @aaikolairport, DGCA has issued operational advisory to Airlines/ Operators. We wish all the passengers to be safe & alert. #CyclonicStormFANI pic.twitter.com/0jyzds82JY

#Odisha: Several trees uprooted in #Bhubaneswar as strong winds hit the region under the influence of #CycloneFani. pic.twitter.com/JXtmoCw1Ad

Rough sea weather conditions in Bhadrak, Odisha under the influence of #CycloneFani. pic.twitter.com/la0z3W5aVG

Andhra Pradesh: People take refuge in a shelter in Ichchapuram town of Srikakulam district. Some houses were damaged in the rain and wind experienced by the district today. IMD says the system influence will be prevalent in Srikakulam for next 12 hours. #CycloneFani pic.twitter.com/qIkVEnjStZ 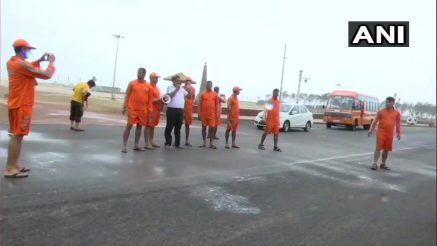 ESCS FANI about 25 km SSWof Puri at 0830 IST. To cross Odisha coast between Gopalpur & Chandbali close to Puri during 0800-1100 IST. Landfall started at 0800 hrs IST. Part of eye lies over land at 0830. Entire process of eye entering into land will be completed in next 2 hrs. pic.twitter.com/2RrDpvyOuj

HR Biswas, Director, Met Dept, Bhubaneswar: The impact of landfall process has started. Fani will make a landfall between 8-11 am. In the morning at 6:31 AM it was 70 km south-southwest of Puri, it is moving now. #CyclonicStormFANI pic.twitter.com/1eUfqYCXXl

Odisha: People take refuge in a shelter in Paradip of Jagatsinghpur. Over 1 million people have been evacuated from vulnerable districts in last 24 hrs & about 5000 kitchens are operating to serve people in shelters. #CycloneFani is expected to make a landfall in Puri dist today. pic.twitter.com/Hp3oXhkPSB

Andhra Pradesh: Visuals from Srikakulam as rain and strong winds hit the region. #CycloneFani is expected to make a landfall in Puri district in Odisha today and continue till noon. pic.twitter.com/GDnufvrQag

West Bengal: Latest visuals from the area around Bichali Ghat in Kolkata. #CycloneFani is expected to make a landfall in Puri district of Odisha today. pic.twitter.com/MAGTH5jMZU

Odisha: #Visuals from Jagatsinghpur district’s Paradip which is on high alert in view of #CycloneFani; the very severe cyclonic storm is expected to make a landfall in Puri district of Odisha today pic.twitter.com/RHK5hnBlx0

Puri: #CycloneFani is expected to make landfall in the district today; #visuals from near the sea. #Odisha pic.twitter.com/2kvVaMnPNT

Digha: Fishermen prohibited from venturing into the sea, asked to vacate the seashore & move to relief centre. Fisherman Sujit Muiya says, “We’re scared. Safety is our priority but once cyclone goes away, we’ll need to earn money. Can’t bear damage of my fishing net.” #WestBengal pic.twitter.com/VJYn5zdelu

Puri: Fishermen in Penthakata village leave their houses for relief centers as #CycloneFani is expected to make a landfall here later today; #visuals from May 2. #Odisha pic.twitter.com/dJfC8jxb72

Odisha: #Visuals from a relief camp in Puri; Jayanti, a Red Cross member, says, “1,000 people have been evacuated. Many people aren’t willing to come, scared their belongings will be stolen. But we’ll evacuate them tomorrow morning at any cost.We want zero casualty.” #FaniCyclone pic.twitter.com/2zYggJUicm

Fani is listed as the most severe cyclonic storm since the super cyclone of 1999 that claimed the lives of nearly 10,000 people and devastated swathes of Odisha, said the Joint Typhoon Warning Centre. After crossing Odisha, the cyclone is likely to move towards West Bengal before tapering off. Besides, the cyclone is likely to impact parts of the northeast, Andhra Pradesh and Tamil Nadu.