Cyclone Mora named by Thailand; this is how cyclones are named

Do you know why the cyclonic storm in being called 'Mora'?

A cyclone dubbed Mora, also known as Cyclone Mora, hit the southern coastal areas of Bangladesh on Tuesday morning. According to the Bangladesh Meteorological Agency, Cyclone Mora is expected to make heavy landfall near the southeastern tourist city of Cox’s Bazar and the seaport city of Chittagong. Do you know why the cyclonic storm in being called ‘Mora’? Last year, India faced four cyclonic storm namely Roanu, Kyant, Nada and Vardah. In 2014, cyclone hudhud created a buzz, with people wondering how these storms were being named.Also Read - Cyclone Gulab: IMD Issues Yellow Alert For Odisha, Andhra Pradesh

The Cyclone Mora is the name suggested by Thailand. Phailin, the cyclone that hit Andhra Pradesh and Odisha coast in 2013, was also named by Thailand. ‘Mora’ is a Thai word, which means ‘star of the sea’. The practice of naming cyclones began years ago in order to help identify them as the technical terms are hard to remember. (ALSO READ: Monsoon 2017: Deep depression in Bay of Bengal reported; rains to hit Kerala) Also Read - Fresh List of Countries Indians Can Travel to

Since 1953, Atlantic tropical storms have been named from lists originated by the National Hurricane Center in USA. To name cyclones in the Indian subcontinent and South East Asian regions, eight countries – India, Bangladesh, Maldives, Myanmar, Oman, Pakistan, Sri Lanka and Thailand – made an agreement and formed a list of names. The list has 64 names. Each country has given eight names. When a cyclone occurs in the Arabian Sea and Bay of Bengal, a name is picked from the list in a particular order. Also Read - Breaking: India Makes RT-PCR Test Must For Passengers From 7 More Countries Amid New Strain Fear 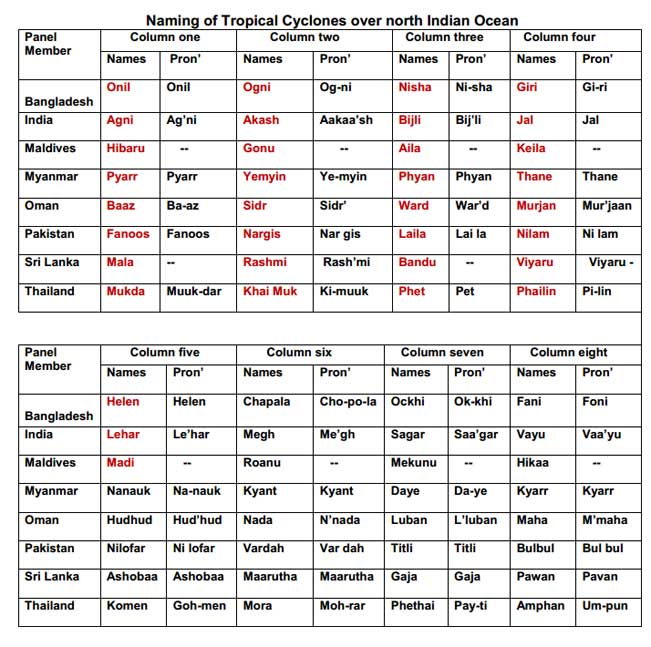 The current cyclone is named Mora which is contributed by Thailand in the list. India recommended Agni, Akash, Bijli, Jal (cyclones which have all occurred since 2004).