The cyclonic Storm ‘Fani’ that is inching closer to northern Tamil Nadu and coastal Andhra Pradesh is very likely to intensify into a severe cyclonic storm today.

New Delhi: The depression over the Indian Ocean and the southeast Bay of Bengal that was moving further towards the north of Tamil Nady and south of Andhra Pradesh is likely to intensify into a cyclonic storm ‘Fani’ today. Also Read - Andhra Pradesh Govt Bars Transport of Liquor From Outside State Sans Excise Duty

An Indian Meteorological Department (IMD) release read, “The cyclonic Storm ‘Fani’ is very likely to intensify into a severe cyclonic storm during next 12 hours and into a very severe cyclonic storm during subsequent 24 hours. It is very likely to move northwestwards till 1st May and thereafter recurve northeastwards gradually.” Also Read - Tamil Nadu Medical Colleges to Get Additional 1,650 Seats: CM K Palaniswami

The IMD has warned fishermen against venturing into the sea today. 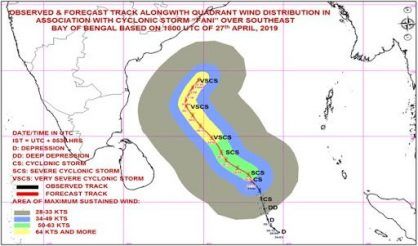 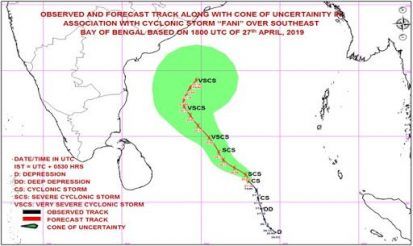 Light to moderate rain is expected to lash parts of north Tamil Nadu and coastal Andhra Pradesh on Tuesday and Wednesday.

There would be strong wind speed reaching 30-40 kmph gusting to 50 kmph along and off Tamil Nadu and Puducherry coasts, Comorin area, Gulf of Mannar and over Kerala, it added. Though the wind speed is expected to decrease gradually by May 3. Authorities has issued warnings at the Visakhapatnam, Machilipatnam, Krishnapatnam and Nizampatnam ports.

The MeT department has also predicted light showers in parts of Kerala on Monday, Tuesday.

With inputs from ANI