Death of Gandhi: Here’s the Cover Image of Kerala Budget Document That Caught Many Eyes

The image was chosen after the oil painting made a remarkable presence on social media platforms on Mahatma Gandhi's death anniversary and was shared by leaders including Congress leader Rahul Gandhi and JNU alumnus and CPI leader Kanhaiya Kumar, among others, on January 30.

New Delhi: Stirring up a row, the Left Democratic government in Kerala on Friday used a Tom Vattakuzhy’s painting Death of Gandhi as the cover image for its Budget speech document to mark 150 years of the assassination of Mahatma Gandhi – father of the nation -and remember the man behind his death. The budget was presented by Kerala Finance Minister Thomas Isaac. Also Read - Former Godse Follower Joins Congress Ahead of Madhya Pradesh Civic Polls in Presence of Kamal Nath

The image was chosen after the oil painting made a remarkable presence on social media platforms on Mahatma Gandhi’s death anniversary and was shared by leaders including Congress leader Rahul Gandhi and JNU alumnus and CPI leader Kanhaiya Kumar, among others, on January 30. While no one attributed the artist for his work, Isaac made it a point that the painter gets his due credit this time. Also Read - Within 48 Hrs of Opening, Hindu Mahasabha's Nathuram Godse Study Centre Shut 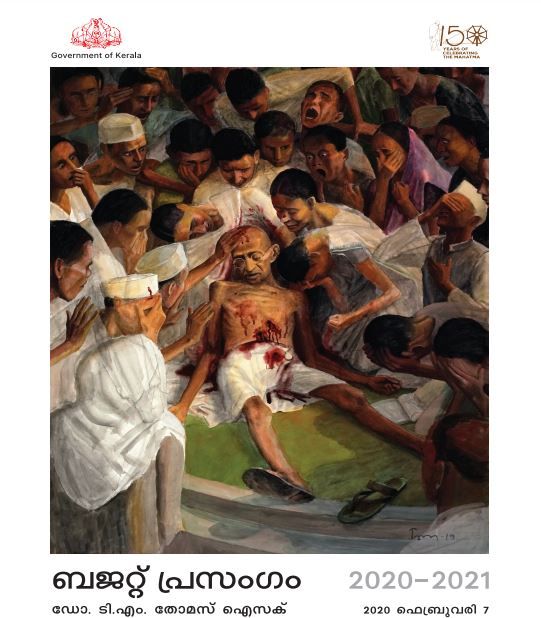 Speaking to news agency ANI, Kerala Finance Minister Thomas Isaac said that he wanted to make a political statement by choosing such a controversial image. “It is a painting by a Malayalam artist of Mahatma Gandhi’s murder scene. We are sending out a message that we will not forget who murdered Gandhi,” he said. Also Read - Hindu Mahasabha to Launch YouTube Channel on Nathuram Godse to Tell Youth About 'Good Work' Done by Him

“This is important at the times when history is being re-written. There is an attempt to erase some popular memories and use the National Register of Citizens (NRC) to divide the population on communal lines. Kerala will stand united,” Isaac asserted.

Notably, over the past year, several leaders of the Bharatiya Janata Party (BJP) had made contentious statements praising Gandhi’s assassin Nathuram Godse. One of the most controversial of them was when BJP’s Pragya Singh Thakur, who is accused in several terrorism cases, called him a “patriot” in the run-up to Lok Sabha elections. However, after receiving immense backlash, she had apologised for the remark. Although her own party members also condemned the remark, no action was taken against her.

This is not the first time the state budget has chosen such a cover image as the government makes sure to make a statement with a special photograph every year. In Budget 2019, the cover image was a painting by PS Jalaja depicting social reformer Ayyankali with a Dalit girl named Panchami.