New Delhi: The Congress party on Saturday released its first list of 54 candidates for the Delhi Assembly elections 2020, scheduled to be held on February 8. Among the prominent leaders in the list of candidates are former AAP leader Alka Lamba, who has been fielded from Chandni Chowk, former Union minister Krishna Tirath, she has been nominated from Patel Nagar. Also Read - Delhi Assembly Election 2020: Congress Holds Meeting at Sonia Gandhi's Residence, Candidate List Likely to be Out Today

The list also has the names of former Delhi minister Ashok Walia and Kirti Azad’s wife. They have been fielded from Krishna Nagar and Sangam Vihar respectively. The party has also named Adarsh Shastri, the grandson of Lal Bahadur Shastri, who joined the party on Saturday, from Dwarka. Adarsh was earlier associated with the Aam Aadmi Party (AAP). Also Read - Delhi Assembly Election 2020: BJP Releases First List of 57 Candidates, Kapil Mishra to Contest From Model Town

However, the Congress has still not announced its candidates for 16 seats including New Delhi, a constituency of AAP leader and CM Arvind Kejriwal. Also Read - Delhi Assembly Election 2020: Congress to Release List of Candidates on Friday 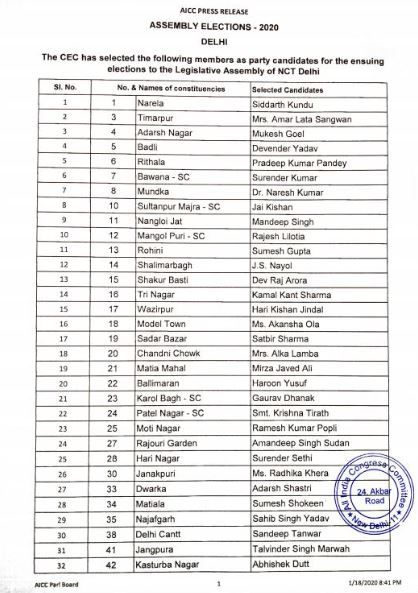 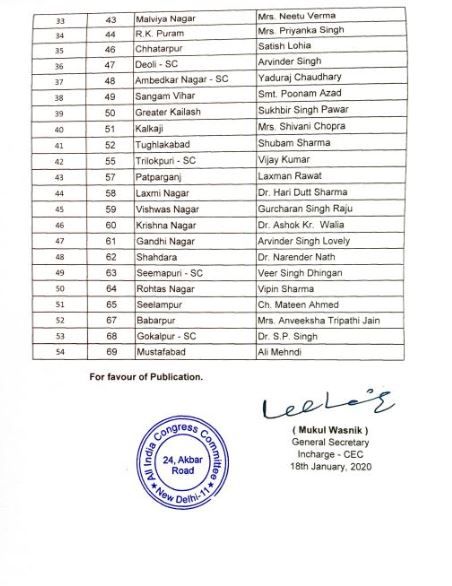 The Congress’ list of candidates came a day after the BJP announced its 57 candidates for the Delhi elections. (Full BJP List).

Earlier in the day,  the Congress Election Committee (CEC), the top decision making body of the party, held a meeting at the residence of interim party chief Sonia Gandhi to discuss the names of party candidates. If reports are to be believed, senior party leaders AK Antony, Mukul Wasnik, Rajiv Satav, Delhi Congress chief Subhash Chopra and city in-charge PC Chacko attended the meeting with Gandhi to discuss the candidature of party leaders.

The Congress despite ruling the national capital for 15 years from 1998 to 2013 was reduced to zero in the 2015 polls. The AAP won 67 seats while the BJP bagged three seats.