Last week, the Chief Secretary alleged that on February 19 night he was beaten up by AAP MLA Amanatullah Khan and another AAP MLA in the presence of Chief Minister Arvind Kejriwal at the CM's Civil Lines residence where he had been called for a meeting.

New Delhi, Feb 27: A week after he was allegedly thrashed by a few Aam Aadmi Party (AAP) MLAs at the CM’s house, Delhi Chief Secretary Anshu Prakash on Tuesday wrote to Arvind Kejriwal asking him to ensure the safety of him and his officers when they attend the annual budget meeting. The meeting is scheduled to take place today to finalise the dates for presentation of the budget.

“The Delhi Government employees are working with full vigour and want that normal functioning of the Government should not suffer. Since finalising dates of Budget Session and passing of the Budget are important for the functioning of the Government, I, along with my concerned colleague officers, will be attending the said meeting,” Prakash wrote in his letter. (Also Read:
No Place For Violence in Democracy: Delhi LG After Meet With CM Kejriwal)

“However, this is based on the assumption that the CM will ensure that there is no physical attack or verbal assault on the officers,” Prakash’s letter addressed to Arvind Kejriwal and others read. (Also Read: Aise Adhikariyo ko Thokna Chahiye: AAP MLA’s Controversial Remark Over Alleged Assault on Delhi Chief Secretary) 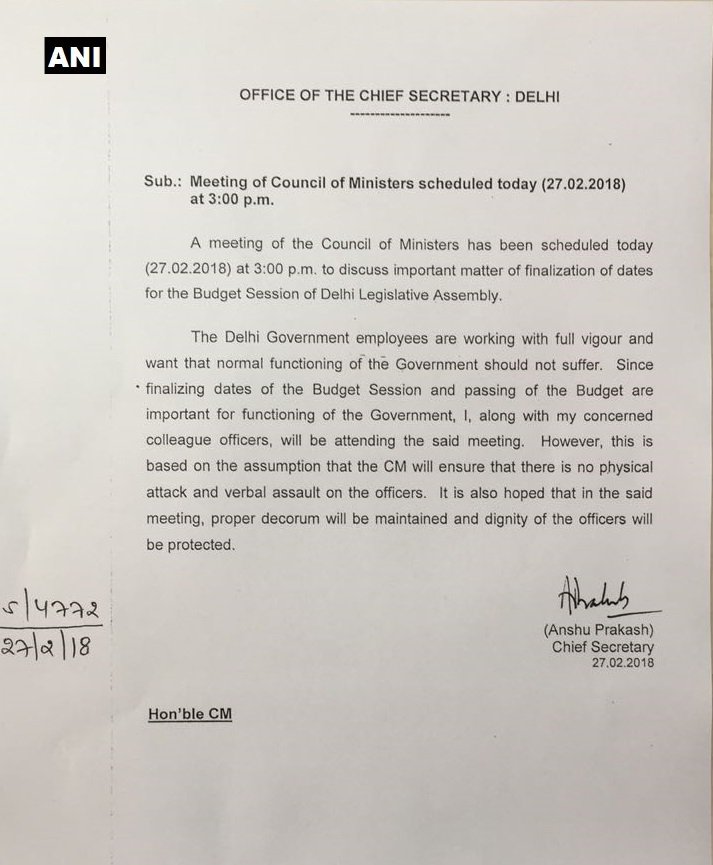 Last week, the Chief Secretary alleged that on February 19 night he was beaten up by AAP MLA Amanatullah Khan and another AAP MLA in the presence of Chief Minister Arvind Kejriwal at the CM’s Civil Lines residence where he had been called for a meeting.

The alleged assault had triggered a huge tussle between the officials and the government. The officials had gone on a mass strike protesting the attack on their top officer. They even protested reporting to work wearing black arm bands.

The Indian Administrative Service (IAS) officers on Monday demanded an written apology from Arvind Kejriwal over the alleged assault on the Chief Secretary. Addressing a IAS Joint Forum here, Pooja Joshi stated that they would continue with the protest sporting black bands protesting the same.

“We want a written apology from Arvind Kejriwal. Instead of apologising for the incident Kejriwal and Deputy Chief Minister Manish Sisodia are in denial,” she added. “This shows they are part of the conspiracy,” she noted.