‘Delhi CM Can’t Transfer a Peon Also, What Kind Of Verdict is This?’ Arvind Kejriwal is Unhappy With Supreme Court’s Verdict

In a strong reaction to the Supreme Court verdict today on the longstanding power tussle between Delhi government and the Centre, Arvind Kejriwal said the judgement is against the people of Delhi.

New Delhi: Raising an emotive pitch during his press conference following the Supreme Court’s split verdict on the jurisdiction over ‘Services’, Delhi Chief Minister Arvind Kejriwal said, “We appeal to the people of Delhi, you have to strengthen us.” Also Read - Delhi CM Kejriwal Still Has Full Z Plus Security Cover: Centre on AAP's Claim

The apex court on Thursday ruled four out of six appeals in favour of the Centre in the longstanding Delhi power tussle between the state government and the Lieutenant Governor. Also Read - UPSC Exam 2021: Supreme Court Dismisses Plea Of Last Attempt Civil Service Candidates 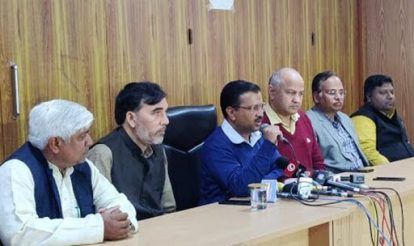 In a major setback to the Aam Aadmi Party (AAP), the Supreme Court bench of justices AK Sikri and Ashok Bhushan ruled that the Centre will control the Anti Corruption Bureau (ACB).  Speaking on which, AAP convener Arvind Kejriwal said, “Delhi government has had authority over the ACB for the past 40 years and now suddenly it does not… If someone comes to us with a corruption complaint, how will we help them?”

Justice AK Sikri held that the transfers or postings of Joint Secretary and officers above are in the domain of the L-G, while other officers fall under Delhi government. However, in case of difference of opinion, view of L-G will prevail.

But, Justice Ashok Bhushan dissented from Justice Sikri on the issue of ‘Services‘ and said that all the officers fall under the domain of the Central government, hereby leaving the power scuffle pertaining to the bureaucracy in a limbo.

Further terming the Supreme Court’s verdict as “unfortunate”, Kejriwal expressed his dismay and said that all the power to transfer is with the party that won three seats in the Assembly election.

Putting onus on the people of Delhi, AAP convener urged that this Lok Sabha election, all seven seats should go to AAP, so that they can continue to fight for the rights of people. “We will fight for full statehood and betterment of Delhi”, Arvind Kejriwal added.

He also said that the anti-BJP vote should not get divided and emphasised on the need to put up a united opposition to the Bhartiya Janata Party.

On the other hand, the BJP has welcomed the verdict and advised AAP that ‘They should humbly accept the order’.