Before the re-mapping exercise, the number of containment zones was 280 in the Capital on June 25.

New Delhi: The number of containment zones in Delhi inched towards 450– 441 to be specific after 175 fresh areas were announced as COVID-19 hotspots on Sunday. With a rise of 37 containment zones, southwest district of the capital city topped the list of hotspots with total 77 red zones, followed by south and north with 52 and 48 containment zones respectively.Also Read - Delhi Cabinet Approves Compensation Of Rs 20,000 Per Acre To Farmers Affected By Unseasonal Rains 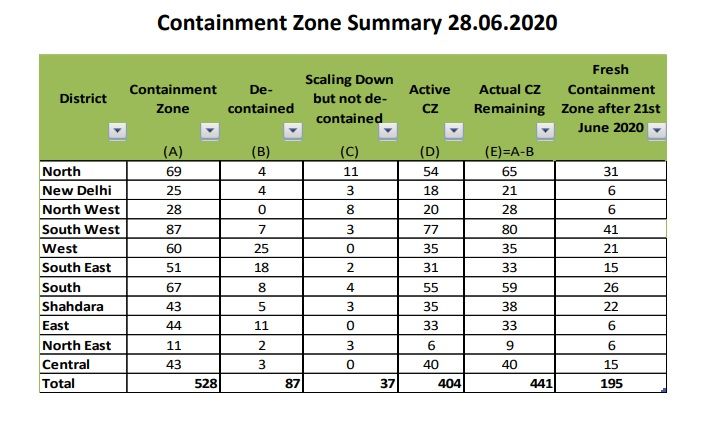 The count of containment zones is likely to jump further as the authorities in some districts are yet to complete the task of redrawing such areas, following the Centre’s directions. Before the re-mapping exercise, the number of containment zones was 280 in the Capital on June 25, an official said. Also Read - Delhi COVID Situation Under Control, City to Record Less Than 5,000 Cases Today, Says Jain | Key Points

As per the COVID-19 response plan issued by the Delhi government, the re-mapping of the containment zones is to be completed by June 30. The exercise was launched on June 26.

However, what can be seen as one step forward and two steps back, as many as 87 areas were de-contained as of latest containment zone data released by the government. Among the decontained zones, most of them fall under west and southeast Delhi.